School for some, fishing for others 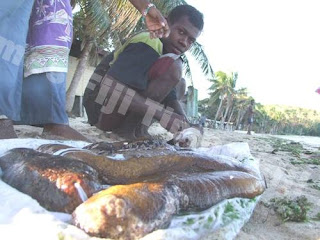 from w
The small island west of Mali Island, Kia, is home to many traditional fishermen, the gone dau. Here's a story of one lad from Kia who couldn't cope with being away from his island so dropped out of school to become a fisherman. The photo shoes him cleaning beche-de-mer. At the same time, it's a pity that kids like Peni drop out of school because literacy etc. is valuable whether you are a farmer, a fishermen as well as a white collar worker. Does the education system in Fiji prepare young people for a variety of jobs, or just raise their hopes to go to places like Suva to find work?
From Fiji Times this week:


WHILE away from Kia Island, Peni Vaiva feels like a fish out of water - strange and not in sync with life. He said that was probably the reason he suffered academic failure as a Form Three student at Nabala Junior Secondary School on Vanua Levu. He was always homesick, wondering about the next trip home - an island encircled by the contrasting beauty of stark black cliffs with patches of sandy white beaches in between.

Kia is a two-hour boat ride from Labasa, an island renowned for its fishing culture and the bounty from the sea.

"I missed the sea so bad that I was always thinking about it; going out and diving, swimming," he said. Nabala Secondary is situated inland which goes to explain the teenager's pangs of loneliness and loss at not seeing something familiar.

"I went back home for a break and never returned to school," he said. Instead, Peni, who is now 20 years old, joined the fishing ranks just like his five brothers who all make a living from the vast sea that surrounds Kia.

He was deftly cleaning beche-de-mer on the beach in front of Yaro Village on the island when Fiji Times caught up with him at three in the afternoon. He'd been out with a group of fishermen diving for fish and beche-de-mer since 8am.

"I've been out fishing with my father ever since I was just a little boy of five," he said. Navitalai Tuirabe taught him everything he needed to know - from gutting a fish, using the right bait, timing the throw of his spear, to surviving out at sea.

"I just didn't have it in me to live an academic life," he said.

"Schooling is for some, just not for me even though my parents could afford to send me to school. This is what I want to do with the rest of my life. I cannot understand Maths' as much as I do the behaviour of fish, where they can be found, the types and all that. I asked my parents not to force me to go to school because my heart was no longer in it. I'm just happy they understood."

On a great day, Peni makes as much as $100, his average income from a catch is about $60. Life is simple, he said, just fish, make some money and be part of the village life. "I like it that way; go onto the mainland now and then but there is no place that beats the island," he said.
Posted by Peceli and Wendy's Blog at 3:47 PM