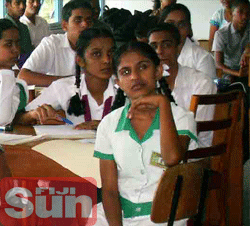 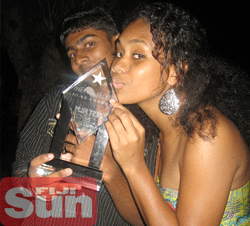 from w
Different photos show different moods of young people from Labasa. The winners of the Kula awards - congratulations, and good on you, prefects, at a seminar learning how to be leaders. But one lot don't look too happy! Next time, Mr/Ms Photographer, please tell them to smile! Both stories were in the Fiji Sun on-line which is very good at picking up stories from Labasa.

Labasa school wins best Films Award
7/12/2010
The hard work and dedication by Labasa Sangam SKM College was rewarded when their film Silent Cry was awarded the best film at the Kula Film Awards at the Tattersall’s Entertainment Centre on Saturday. Teacher in charge, Subhash Chandra dedicated the win to the hardworking students and parents who supported them throughout the production of the film. “Being the only school from the North taking part in this award, this achievement is not only for the school but to the people of North as well,” Mr Chandra said. “Our trip was worth it and we were not going home empty handed”, he said. Despite facing time constraints and natural disaster related problems, he said students put in a lot of effort in the film and he was really impressed with the dedication that was showed by the students. “The requirement of Fiji Audio Visual Commission was that the film has to be student input. Shilpa Lal, a Form Six student wrote the script and the lyrics, Ilai Lomaloma, a Form Four student provided the music and song was sung by Eseta Cokanasiga a sixth former, and Aqela Ratumudu who is in Form Seven was the lead actress.” The highlight of the movie was its original music which won the FM96 Best Music award. Mr Chandra said the movie was about having positive approaches to life. Silent Cry as based on student depression and what they go through in exams and other pressures, but do not give up easily.”

Apart from Best Film and Best Music awards, the school was the runner-up in the Hollywood dance competition.

Mr Chandra thanked the administration, teachers, Secretariat of the Pacific Community and the Fiji Audio Visual Commission for making the movie a success. The college has been a regular participant in the competition since 2008 and had previously won Best Actor and Best Movie awards in their first year of participation.

Children’s Fund organises prefects’ seminar
7/12/2010
A prefects’ seminar was organised by Save the Children Fiji for Macuata schools heads at Ro Qomate House in Labasa over the weekend. More than 50 prefects from 20 different primary and secondary schools attended this seminar. There were many facilitators who imparted knowledge on roles and responsibilities of prefects in school, rights of children, human values and how to effectively perform a leadership role.

All Saint Secondary School principal Sumiran Pratap was among the facilitators who disseminated information on prefect’s role and responsibilities. “The four main roles of prefects are maintaining discipline, helping staffs, supporting younger students and organizing activities,” said Mr Pratap. He added that leaders must live by example and work as a team not as an individual.

Retired Divisional Education officer Northern Mohammed Rafiq said that the seminar provided lot of information to participants, especially on the leadership qualities they need to acquire. “Prefects need to understand what they are required to do, how they should do it, the responsibilities and the limits of their authority,” said Mr Rafiq. He added that a similar workshop will be conducted for the prefects in Cakaudrove and Bua in a few weeks.

Dreketi High School head girl, Shradha Mala, 18, said that the seminar was educational and she was thankful to organisers for giving an opportunity to prefects of rural schools to participate. “Being a head of the school and having a responsibility to look after more than 300 students is not easy at all,” said Shradha. She that through the workshop, she was challenged by how to overcome difficulties and acquire some skills in building a good prefect system in school.
Posted by Peceli and Wendy's Blog at 5:13 PM