from w
There's been a story running about Fijian seasonal workers in the Robinvale area because six have moved on - perhaps in Melbourne or back to Fiji. They were unhappy with their conditions and pay. Anyway here is one explanation of how workers get paid. A lot of money is deducted from the gross pay so they end up with very little. If it's about piece work then it's about productivity of course.  There are many Islanders up in the Robinvale and Mildura area and I haven't heard complaints out loud before but I can understand the disappointment of some of the agricultural workers. 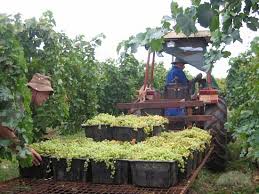 Vuniwaqa Bola-Bari And Atasa Moceituba
Monday, December 21, 2015
SOME workers who are part of the Seasonal Workers Program in Australia are earning $A191.93 ($F296.64) weekly.
The workers, who are doing leaf plucking at a vineyard, say they are not happy with their take home pay.
Pay slips provided to this newspaper showed they had $210 deducted for food and accommodation, $33 for health insurance, personal support workers (PSW) deduction payments of $50 as well as superannuation.
One worker had a gross pay of $A569.93 ($F880.86) after all deductions, the worker received $A191.93 ($F296.64) as net pay.
Another worker received $A467.10 ($F721.93) as gross and got only $A154.10 ($F238.17) as net pay. One had $A439.20 ($F678.81) as gross pay and received only $A130.20 ($F201.22) as net pay similar to other workers who had given in their pay slips. Responding to the claims, the Minister for Employment, Productivity and Industrial Relations, Semi Koroilavesau, said the seasonal workers pay was based on their productivity.
"If they are complaining and have no intention to work then the question that arises is what was their intention in going?"
A spokesperson from the Australian High Commission said seasonal workers had the same rights at work as other workers in Australia.
"Workers are covered by the minimum entitlements under the National Employment Standards.
"They may also get entitlements from an award or registered agreement and the Australian Government is committed to ensuring the safety and fair payment of all seasonal workers," the spokesperson said.
"Under the SWP, approved employers are able to take reasonable deductions from a seasonal worker's pay to cover expenses relating to such things including accommodation, health insurance, transport, flights, food (if necessary) etc.
"The amount a seasonal worker receives as their net pay can depend on many factors, including the rate of pay they receive, a worker's productivity and the level of deductions seasonal workers agree to before their employment in Australia.
"Under a piece rate agreement as per the Horticultural Award 2010, which enables workers to earn per unit of produce they harvest, the rate set out in the award enables an average competent and productive worker to earn at least 15 per cent more than the equivalent hourly rate.
"However, if workers are less productive, it can result in workers earning below the expected amount per week (compared with hourly work)."
Mr Koroilavesau confirmed in a phone interview yesterday that workers were paid based on their performance.
"They are not paying anything more and they are supposed to be surviving."
Mr Koroilavesau said workers had a three-day pre-departure orientation in which they were explained of what their contracts contained before they signed it.
He said the superannuation deduction which went to the Australian Government could be claimed back after they were done with their contract in March 2016.
Posted by Peceli and Wendy's Blog at 4:31 PM No comments:

Our Christmas letter for 2015

Greetings to you from Peceli, Wendy, George, Bale, Epa, Grace,  Jordan, Andrew,  Andrew Snr, Eka and Linlay. Yes, that’s the lot of us who will be together for Christmas this year – filling up the two houses and the bungalows and sharing the tidying up and the cooking.  Perhaps a lovo (underground oven) and seafood. We are reminded of Christ’s birth with the carols, messages, decorations and the bling conical tree in Geelong that lights up the Geelong waterfront sky. Let us honour and pray for one another, for miracles in our difficult world  today and may this message of good will give peace to you. 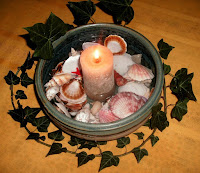 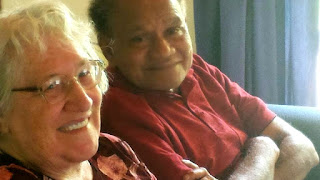 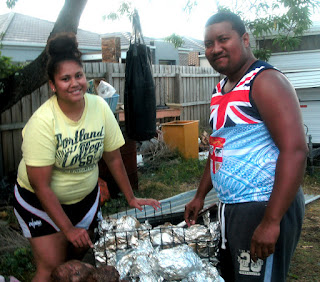 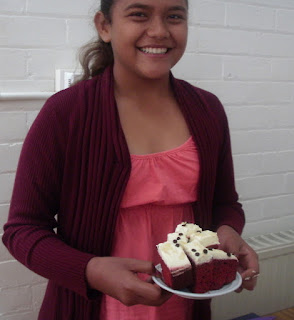 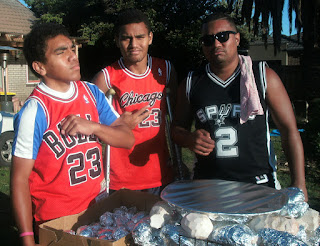 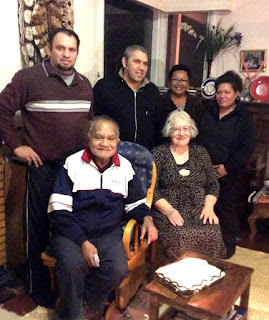 Our compound,  now called Vatuadova Kisi is busy with the large family and often visitors, so kava is occasionally flowing. This year Andrew’s 13 year old daughter Linlay came over from Tonga and started school at Form 2 at Geelong High School.  It has been a joy to have a teenage girl join our household. Young Andrew is also at Geelong High and completed Year 11. Bale works down at Lorne and Jordan worked  there for several months this year. The boys are now sixteen and eighteen so both do some part-time work.

Health issues for us oldies mean  pills and checkups and aches in the night mean I’m  on the internet at  2 a.m. with a hot water bottle and Deep Heat on  my knee.. The young ones in the family play tennis summer and winter for East Geelong Uniting, touch rugby, a bit of indoor cricket and Andrew Snr attempts to get them interested in athletics.  Peceli and I still go for drives and simple picnics and some sketching  to enjoy the beauty of the Bellarine Peninsular and discover new places nearly every week. Peceli gave up Rotary and we go to fewer Diversitat  or community meetings these days. There were no trips to Fiji this year, just a few days holiday at Port Fairy which was nice. Our Fiji Friendship Club continues with dinners and a lovely barbecue/lovo at Rippleside Park in December.

Peceli continues his relationship with  some of the Fijian families in the Werribee and Altona Meadows/area and I still play music at East Geelong.  A Tongan minister, Rev Ikani continues to be an inspirational leader of our faith community.  There has been sadness this year as we farewelled several friends as age or illness caught up with them.

Friday August 21st  was a significant day at our family village of Vatuadova near Labasa with the opening of the new Methodist Church there. The former wooden church which opened in June 1998 will be used for cultural activities and a kindergarten. It was too small for the people nowadays. The building process took three years of fundraising and then the carpentry team stage by stage built the church. Congratulations to all concerned. Thank you to the men and women of the former South Geelong Uniting Church for their contribution of $10,000 to the final stages.

Loloma and  best wishes for the Christmas and New Year season. Our email is pecr@iprimus.com.au and we’re on facebook.

Wendy R and gang from Geelong.
Posted by Peceli and Wendy's Blog at 5:00 AM 1 comment:

from w
from Fiji Times'

Serafina SilaitogaSaturday, December 12, 2015
THE proposed bauxite mining in the district of Wainunu has not been accepted by majority of the villagers because its monetary value of four cents per kilogram was much less than dalo and yaqona.
This was revealed yesterday by the Bua Urban Youth Network after a team conducted a survey in six villages interviewing traditional leaders, children, youths, women and men.
The group's spokeswoman, Vani Catanasiga, said out of the seven villages in the district, the group didn't cover Saolo but they had been assured by traditional leaders and villagers that they didn't want bauxite mining.
"We based the cost of bauxite per kg from the price published in The Fiji Times earlier with $US20 ($F42) a tonne so landowners would be paid four cents a kilogram of bauxite," she said.
"Compared to dalo which sells for about $3 a kg and yaqona between $25 and $40 per kg, landowners should not be misled.
"And with Wainunu and Nadi districts already booming with its dalo exports, landowners feel this is the way to go and not bauxite."
Another major reason cited by the villagers was the fact that bauxite has been identified in their farms and villages.
"For Nadua Village, they have told us that bauxite sits in their village but they are not interested at all in relocating," Ms Catanasiga said.
"Bauxite has also been found in their farms and most of these villagers depend on the food to feed their families and earn an income.
"They have also learnt from the Nawailevu saga and these villagers in Wainunu don't want the same to happen to them."
Tui Wainunu Ratu Orisi Baleitavea has called on the youths to work with his Wainunu Development Board.
"Instead of these youths shooting bullets at us, let them come out to talk to us and we work together on other options for the people of Bua and Wainunu to improve their living standards and alleviate poverty," he said.
"In 2012, we approved a mandate at the chiefs meeting in the district to have bauxite mining in Wainunu but like I said before, we will include wider consultation for all villagers."
Posted by Peceli and Wendy's Blog at 2:08 PM No comments:

from w
Here's a good story from Labasa and the success of a goat farmer there.

A 53-year-old goat and sheep farmer of Wainikoro, Labasa says that he will celebrate this year’s Christmas in a big way with his family.
Mohammed Aiyub Khan says that this year he has secured buyers from the Central and Western Divisions and he is expecting to make a profit of close to $10,000.
Khan says in the past years he used to sell his goats and sheep to only the Labasa market but this Christmas has opened new doors for him.
The father of four says he has more than 200 goats and 86 sheep.


Khan says he will spend the money to expand his farm and do a big Christmas shopping.
Posted by Peceli and Wendy's Blog at 12:57 AM No comments: