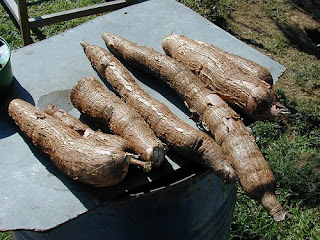 from w
Surely there needs to be vigilence when farmers are promised an outcome and the deal fails. I feel sorry for the Macuata farmers who have been disappointed that their hard work has come to nothing in the case of a project to sell cassava. Meanwhile there are Agrictultural Shows going on! And it looks like Jo doesn't have much advice either! I presume the AMA is a part of government. The journalist could have gone a bit deepr and checked what the AMA actually do do.
From the Fiji Times today:
$0.1m cassava to waste
Serafina Silaitoga
Monday, July 19, 2010

ABOUT $100,000 worth of cassava had to be dumped in three Macuata districts last year as a result of failed marketing arrangements. Twenty villages in the districts of Macuata, Sasa and Dreketi were affected forcing the authorities to monitor export agents.

Seaqaqa district rep Tiko Yacalevu said $100,000 worth of damaged cassava was a waste of effort. "It hurt many villagers seeing such a huge amount of cassava thrown away, simply because one party did not keep its side of the bargain," he said. "Before Hurricane Tomas, all our cassava plantations were ready and we had contacted the Agricultural Marketing Authority after filling in forms they brought to our villages. But we didn't receive any response. When the hurricane hit, only some crops was damaged. The undamaged crops remained in our farms and efforts to get in touch with marketing agents and AMA didn't turn out as expected."

Mr Yacalevu said the disappointing state of affairs had not disheartened the villagers. "We will continue to plant for Fiji's economic purposes - that's why the villagers, although disappointed with the first farming project, have increased their output," he said.

Mr Yacalevu said village committees had started liaising with other export agents to prevent a repeat of their experience.

AMA managers were unavailable for comment but Agriculture Ministry head Joketani Cokanasiga said he wasn't aware of the situation and advised the villagers to always inform the ministry of deals made with exporter agents.
Posted by Peceli and Wendy's Blog at 3:26 PM

Wendy what do you think of this practice of Pacific Church Ministers getting envelopes of cash when officiating during duties.

Hello Jambalaya,
I guess it depends on a few things. If the minister has a very low income, then baptisms and weddings allow for a little gift of money, or mats or masi. However if the minister has a fair salary,he or she doesn't need extra. Gifts in kind are better than cash i.e. a nice feast! Or a leg of meat to take home and share with the extended family! I don't know whether you are referring to Fijian, Tongan, Samoan or other ministers. Methodist or others? The word 'minister' means to serve so that always should be kept in mind. It is not about 'status'.
Wendy