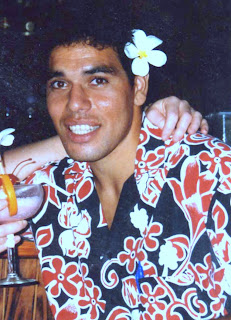 Robin was born on 11th November 1969 at the Ba Methodist hospital. The family were living at the time in the sugar-cane area of Rakiraki where Peceli worked as the Methodist padre to the Indian community. The family life revolved around pastoral visits among the cane farms, Robin carried in a basket, George toddling beside.

Then after one year in Dilkusha, the family moved to Labasa on the island of Vanua Levu to live with relatives at Vatuadova cane-farm. It was an idyllic childhood for George, Robin, and Andrew beside the sea, living in newly built bamboo huts at Nukutatava beach.

When the family moved to Australia and Robin started school at Swan Hill Primary and spoke in Fijian to his Australian teacher. Then at Hopetoun, another Mallee wheat town, where Peceli was the Methodist/Uniting Church minister, the three boys drew friends to the house every day, joined tennis, swimming, the Minnies football, cubs and then scouts and went on camps and learnt to cook sausages. Suzie, the kelpie cross dog produced litter after litter and Robin loved the puppies, though he never could abide cats. He followed the Richmond team fanatically and obtained the autographs of all the players because his grandpa George Lay knew one of the players. Robin often wore a Richmond jumper to school. The Ratawa children were able to visit relatives often in nearby Swan Hill and were much loved by Grandma and Grandpa Lay and got to know their Australian cousins in Swan Hill, Ballarat and Sydney. In Sydney, when the family visited Bruce and Sarah, during a performance of Madame Butterfly the Ratawa boys climbed on top of the Opera House.

The Ratawas were invited to Geelong East Parish of the Uniting Church probably because of the three beaut kids. This move coincided with the High School years and the family lived in Shenton Manse near the High School. Robin often brought his friends home at recess or lunch time to eat. Special friends included Tony Malakelos, Ben Reynolds and Christopher Yee. There was more laughter than hard work those days. Tennis was with the Uniting church club and football with Thomson and then Amateurs. Robin was in a Scout group at St Andrews and went on a jamboree to Fiji with Scouter Andy Dickson. Robin was active in the local church, youth group and carpet bowling.

He followed George to Deakin University but his heart was not in the computer course so he started work at Steggles Chicken factory in the Despatch Department, the daily routine to wake up at 4 a.m. prepare a huge lunch, then drive off in the Cortina. Andrew joined him at Steggles.

Every year Robin visited Fiji, usually with his mate Ben and they developed a network of great friends in Nadi, Suva and Labasa. They sometimes arrived back in Melbourne airport with empty cases and shoeless.

Social life was based on the Amateurs Football Club and Robin learnt bar skills, completed a short hospitality course and found his niche. By this time George was working in IT in Fiji so Robin decided to obtain a job in Fiji, firstly at the Regent hotel and then at the newly opened Lakomai Time-share Resort on Malolo Island. Over five years his hard work and charismatic manner raised this little resort to a popular destination. The same families went there year after year. Sala and Robin worked together, then married and their two children are Jordan and Andrew. At small Andrew’s baptism, Robin and Sala re-affirmed their wedding vows at Navuso, Sala’s village.

When Andrew senior visited Fiji for athletic meets in various South Pacfiic countries he visited Robin in Lakomai every time.

As Duty Manager, Robin worked long hours and in the turmoil in Fiji in 2000 he was disturbed by the damage to tourism and that many of his staff and friends lost their jobs. He loved Lakomai with its beautiful environment and was popular with tourists and staff. ‘The Fijian with the Aussie accent!’ ‘The Tom Cruise of the South Pacific’!

We thought Lakomai was a placed of safety and yet an accident happened there on 10th July 2000. Robin was thirty years of age.

Many people have been touched by Robin’s life, his charm, his extrovert personality, his joy in life and his friendly, respectful approach to all kinds of people. He always looked for the good in people and will be remembered with love by us all. Robin is now in God’s safe-keeping but we are so saddened by his absence from us.

What a great story. Thankyou for sharing the memories.

Hello NZM and Andrew,
Thank you for your comments. Today we are recovering from such a busy day of mixed emotions.
Wendy and Peceli

He was a great father any child could ask for. Even though things did not work out between him and my mum, he would make sure to visit me while he was in Labasa. I have vivid memories of him. Still, remember the time when he sat me down on the chair a few months before his passing to tell me that he was not only my mother's friend but also my Dad. He would buy toys, a way to lure me to go with him to Vatudova. I remember at times, while in Vatudova I would cry to go back to my mother, he would hug and carry me, reassuring me that he would take me back home. I thank God for every remembrance of him. Thanks for giving me a son, I could call Dad!