Doing it for yourself 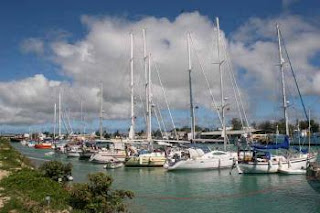 from w
It was good to read in one of the Fiji papers on-line about a venture in Savusavu by Mr Irwin. Instead of whinging about what the gove rnment is doing or not doing, the people of Savusavu are doing it for themselves. Way to go!

Irwin opens $m marina
7/27/2010
Savusavu Marina Village at the end of Nakama Creek, Vanua Levu opened a marina dock worth a million dollars. The marina with berthage for yachts and boats of up to 20 meters was officially opened last week. Savusavu Marina Village executive chairman Robin Irwin said, like vehicles parked at the car park so do boats and yachts which also need a marina to dock in.

“People coming to Savusavu in boats or yachts can park it at the marina and comfortably travel on land without worrying since their property would be in safe hands,” Mr Irwin said. He said he spent $1 million to build the marina which took more than a month to complete. “Being a sailor myself, I realised that there’s a need for a marina in Savusavu for yachts to moor at.” He added that he chose to build the marina dock at the end of Nakama Creek because it was well protected.He added that he was opening up a marina workshop in September which was still being constructed. “I am doing this entire development project to help in the growth of the tourism industry in Savusavu,” he said.
Posted by Peceli and Wendy's Blog at 5:18 PM