A thoughtful article on perception and race

from w
Eureka Street magazine from Melbourne, Australia, usually provides excellent reading and a writer, embedded in a French village, has had several pieces published recently. Bronwyn Lay won the third Reader's Feast/Eureka Street Award for her essay entitled "The Mingled Yarn". At the Crime and Justice weekend at the Convent it was said, 'In answer to the posed question - Is Australia a Racist Country? - her essay was thoughtful, intelligently articulated, and heartfelt. Temporarily living overseas, Bronwyn also brought the perspective of the ex-pat to the subject and the view of Australia in an international context.' The full article was published last week and can be read by going to the following link.

My relatives alerted me to the article via Facebook as Bronwyn is my niece, so I downloaded and printed out the article for the family here to read (and a couple of church friends). It is a timely article, without hammering a case. The writer has teased out the way our imagination can confuse and make judgements about people. She starts in a provocative manner with a reference to my father which gave me a jolt, but then she went on to explain that our views of people are not made fairly because we stereotype and generalise about people of a different generation.

The article is well worth a read for those who are concerned about views of 'others' in the Fiji context.

The title of the article itself is interesting. A yarn can be a long-winded story in the Aussie manner, or lengths of wool. The word 'mingled' could be replaced of 'mangled' or even 'tangled' because we usually do not take time to separate the threads of unspoken racism in us. 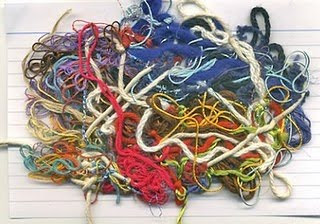 The article starts as:
The Mingled Yarn.

We make things up. We’re good at it. We could get better.

My granddad was a fourth generation white Australian who worked with sheep, lived in a flat wheat-belt town by the Murray River, and was embedded in the local chapter of the Freemasons. I used to tell the story that he was a small town racist who disliked Blacks, Catholics and Jews. The punch line was that his daughter married a Fijian, his son married a Jew and my dad married a Catholic. I didn’t know him well so, to suit my story, I made him up from bits and bobs. It wasn’t true. My grandfather wasn’t racist. My white lie commits the identical error as racists – imagining knowing someone based on their demographics. I should watch where my imagination takes me. I might hurt someone.

The nation is an imagined community. It requires imagination to presuppose that one citizen has anything in common with another merely because they share passports. Imagination, however, is not untruth, because fictions are powerfully imbedded into our identity at a corporeal level. Simone Weil said, “Imagination and fiction make up more than three quarters of our real life. Imagination is always the fabric of social life and the dynamic of history.” The imagining of belonging is linked to body, language and thought and informs our interactions.

Living overseas a random Australian accent sends a signal through my body – I hear home – speaking to me about memories, love, and familiarity. Meeting fellow Australians, from whatever background, is easy. Our manners relax, our shoulders slouch and we immediately use first names. We become unselfconscious in body and tongue, the powerful fictions of togetherness at play between us. These fictions are fragile because we’re expats – we’ve a reputation for making up stories about home being better or worse than it is.

The fiction of Australia is inherently fragile because it is a nation of thrown togetherness: from the violent throwing together of the first fleet and the indigenous peoples, to those who were thrown out of their lands, or threw themselves here. For whatever reason, it’s an accidental society and it hasn’t been easy, so many horrific mistakes have been made, but Australia has managed to cobble together something others call a mutt, a fusion, but seems to work for the majority. Other times Australia is blindly muddling its way through an unpicked history, faking comfort, relying on thin nationalism and unable to face the genocidal facts done to indigenous peoples, the real differences between us, and the struggles of immigrants come to seek a new life only to find intolerance and isolation. These issues threaten the tenuous fiction of Australia’s togetherness.

Arufura Sea 2007. We suck molluscs gathered from the shoreline and chew kangaroo tail straight from the fire......

(and a memo to Bron if you read this: Re the pesky Freemasons and my Dad, they were not his priority - but the sea, the land, the community progress were his main loves. Anyway I remember at the funeral after the Masons chucked down some leaves or something, my brother Doug said we'd have the last word, as he threw down a sample of very fine wool, a tribute to Dad's many years in the wool industry. Cheers!)
Posted by Peceli and Wendy's Blog at 11:04 PM