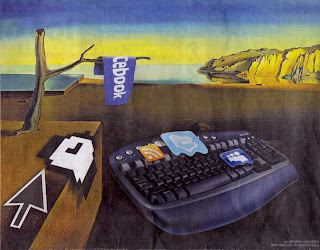 from w
Although Facebook is an excellent tool for getting in touch with relatives and friends and even finding very old friends, we do need to be cautious. The article by Jeffrey Rosen in the New York Times a week ago, and yesterday in Melbourne's Age newspaper under the heading 'The Persistent Memory' is timely reading. The illustration based on a picture by Salvatore Dali was in the Age. Credits - Judy Green. I've noticed people even put their telephone numbers on Facebook, and often silly remarks or pictures of themselves. These might haunt them later on when looking for a job or relationships. In a country like Fiji where there is a strong oversight of print media, things written in blogs and on Facebook type of websites require care. Count to ten before publishing it!

Here's the last two paragraphs as in the New York Times (it's all on-line). It's here referring to a young woman who posted a silly photo of herself.

But a humane society values privacy, because it allows people to cultivate different aspects of their personalities in different contexts; and at the moment, the enforced merging of identities that used to be separate is leaving many casualties in its wake. Stacy Snyder couldn’t reconcile her “aspiring-teacher self” with her “having-a-few-drinks self”: even the impression, correct or not, that she had a drink in a pirate hat at an off-campus party was enough to derail her teaching career.

That doesn’t mean, however, that it had to derail her life. After taking down her MySpace profile, Snyder is understandably trying to maintain her privacy: her lawyer told me in a recent interview that she is now working in human resources; she did not respond to a request for comment. But her success as a human being who can change and evolve, learning from her mistakes and growing in wisdom, has nothing to do with the digital file she can never entirely escape. Our character, ultimately, can’t be judged by strangers on the basis of our Facebook or Google profiles; it can be judged by only those who know us and have time to evaluate our strengths and weaknesses, face to face and in context, with insight and understanding. In the meantime, as all of us stumble over the challenges of living in a world without forgetting, we need to learn new forms of empathy, new ways of defining ourselves without reference to what others say about us and new ways of forgiving one another for the digital trails that will follow us forever.
Posted by Peceli and Wendy's Blog at 1:17 AM