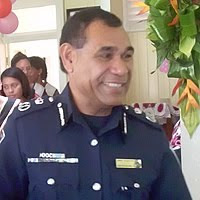 from w
It's interesting times, but without the comedy of dancing on the stage. A new leader, a reform to rethink whether religion should be imposed or each person has their own views. Good move.
from Fijilive:
Police religious activities suspended
August 27, 2010 05:17:28 PM

The new man at the helm of Fiji’s police force has suspended all religious activities within the force, the police website reports. The website said that Deputy Commissioner Joeli Baleilevuka who was appointed acting Commissioner of Police after Commodore Esala Teleni resigned on Wednesday, has suspended all church parades and other religious activities in the force.

Teleni introduced the ‘Jesus Strategy’ which involved an emphasis on Christian preaching and ‘crusades’ as part of a community policing initiative to reduce crime by reaching crime prone areas and people with spiritual content.

The police website said religion was an important part of Teleni’s life.“A lay preacher, he preached regularly at Nasova (police barracks) and also brought in a full-time padre for the Police Force.”

The website article also said that all community policing crime prevention programs had been suspended in order for Baleilevuka to review the programs. “It is a normal procedure that all commissioners follow while taking up this post,” he said. Baleilevuka said at a press conference today that there would not be any changes to the hierarchy of the police force.“To me it’s like now I am wearing two hands as deputy commissioner and acting commissioner so I find that it is not high priority to change the hierarchy of the force.”

A career policeman who was recruited to the force in the 70s, Baleilevuka was appointed deputy commissioner when his predecessors retired last year.

By Richard Naidu
----
and from Fiji fbc on Monday. A new broom sweeps clean. Sounds like the way to go. The police must be both efficient and have integrity.
Fiji Police to review new posts
Monday, August 30, 2010

Acting Police Commissioner Joeli Baleilevuka Taken from / By: FBC News
All new posts within the Fiji Police Force created by former Police Commissioner Commodore Esala Teleni will be reviewed says Acting Police Commissioner Joeli Baleilevuka. Baleilevuka told FBC News he will need to evaluate the new positions with the manpower in the Force to see if the posts are really needed. He says the posts that are not needed will be removed. The posts that will also be under scrutiny will include those that Teleni announced prior to his resignation last Wednesday.
And - later from Fiji FBC:
Police stops crusade, kava decision soon
Monday, August 30, 2010

Taken from / By: Fiji Police
The Fiji Police Force is an arm of government providing law and order services to the people, not a worshiping group says Acting Police Commissioner Joeli Baleilevuka. He made the comments as he announced the total removal of the Police Christian crusade programme as well as tours by the Police worship group. Baleilevuka also told FBC News he will soon be making a decision on the directive by his predecessor banning the drinking of Kava in Police quarters. Baleilevuka told FBC News the only directive put through by government is there will be no drinking of Kava in the work place. They will decide soon if the quarters housing Police officers should be treated differently.


Let me just tell you that I am using these tools and techniques from years, and these tools have helped me to achieve more organic traffic to my blog and my websites. Moreover, I not only use these tools for blogging but I also use them for other sites.

I would love to know about your opinion about ranking a site without backlinks. So, feel free to tell us through your valuable comments.