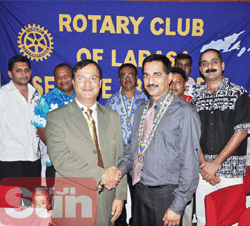 from Peceli,
It's good to see news of the Labasa Rotary Club and their changeover. I go to their meetings when I am in Labasa and our Geelong Donation in Kind have been sending containers to Macuata in the past few years. One should be arriving there this week with gifts for hospitals. Also, one of our Geelong Rotary women, Joy, works very hard to help the people in the Dreketi region.

"This is where clubs and organisations are needed the most,” Lieutenant-Colonel Seruiratu said.

"Two major challenging projects I carried out with the club members was reaching out to assist victims of Cyclone Tomas and renovating the Squash Court beside the Holy Family Primary School in Labasa," Dr Niazi said. "The Rotary Club is about community service and I have learnt that there is great blessings." He said that being a doctor and at the same time a Rotarian, his life changed in a way that he never thought it would.

Mr Prasad, as the new president said, he was prepared to work with all his strength.

The father of two aims to focus on health outreach programmes in rural communities.
Posted by Peceli and Wendy's Blog at 3:32 PM