Amazing for our little country of Fiji to have the UN President come from our islands.

Posted about an hour ago 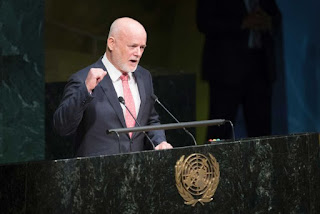 Fiji's ambassador to the United Nations, Peter Thomson, has been elected as president of the UN General Assembly, the first person from the Pacific islands to hold the position.

He won the job in a two-way contest with Andreas Mavroyiannis of Cyprus, by a vote of 94 to 90 in the 193-country assembly.
It was a rare election for the post of president of the assembly — normally a single candidate is elected by consensus without a vote.
Mr Thomson said his win recognised that the 12 small developing Pacific island states were playing an active role in the UN.
"We're not just here to make up the numbers, we're here to contribute as well," he told Pacific Beat.
He said climate change and saving the world's oceans would be at the top of his agenda.
"Whether you look at ocean warming — or whether it's ocean acidification, declining fish stocks, marine pollution — the ocean is dying, and we're here to tell the world that is not good enough, we're going to turn it around," he said.

"You can expect me to be vocal on these issues."

Fiji was the first country to ratify the Paris climate deal on global warming.

Mr Thomson said he would push for progress on achieving the UN's 17 Sustainable Development Goals.
"The fact is we have to implement that agenda again if we're going to produce an environment, or sustain an environment, where our grandchildren can live on this planet," he said.
He went on to say: "Anybody who hasn't familiarised themselves with those [goals] is not playing their full role as a human being.
"We must all embrace those [sustainable development] goals — they're the recipe for our survival on this planet."
The Pacific Community (SPC) welcomed the news, with director-general Colin Tukuitonga describing it as a momentous occasion for the Pacific Islands in the international arena.
"It's significant in that it's the first time a representative of the Pacific Islands region has become the president-elect, and it acknowledges the contribution of Small Island Developing States to the UN family," Dr Tukuitonga said.
"This is a well-deserved appointment, and SPC stands ready to assist ambassador Thomson with information and technical support about the Pacific region, as needed."

Fiji had its first democratic elections in eight years in 2014, when Frank Bainimarama was elected Prime Minister after leading a military coup in 2006.
Despite rights groups and opposition MPs recently raising concerns about human rights in Fiji, Mr Thomson said his country was "regarded in a very positive light" at the United Nations.
"We're doing our bit in UN peacekeeping, we send hundreds of Fijian peacekeepers to the trouble spots of the world," he said.
He said every government faced opposition.
"I don't think we should dwell on the negative today," he said.
"Fiji is a country which I'm immensely proud of — I'm a fifth generation Fijian.

"There was not a stage even when I was a political prisoner in Fiji, lying in the cell of an army prison, that I did not feel immensely proud of my country and all it does in this world."

He added: "[As president] I won't be representing any particular country, I'm there to uphold the charter of the UN, its principles and purposes, for the good of humanity."
He also pledged to keep pushing for more transparency in the largely ceremonial but high-profile post, after his predecessor from 2013 to 2014 was accused by US authorities of taking $US1.3 million in bribes from Chinese businessmen.
Mr Thomson will also oversee the process of finding a new UN secretary-general to replace Ban Ki-moon at the end of the year.
Mr Thomson will begin his term in September at the start of the UN's 71st General Assembly session.
ABC/ wires
Posted by Peceli and Wendy's Blog at 11:28 PM