Sandalwood is a great source of income as long as no-one cuts down your tree when you are not looking.
From Fiji Times:

Villagers of Veiseaseavula inside their new nursery. Picture: LUKE RAWALAI 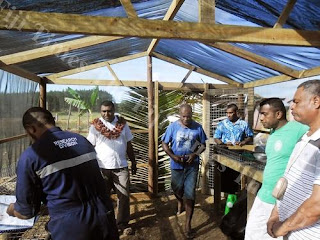 AIMED at reviving the sandalwood plant in the Lekutu area and generating income for families, villagers in Veiseaseavula witnessed the opening of new sandalwood nursery.
Project co-ordinator Jovesa Ryder said the main aim of the project was to revive the plant which had vanished from the area since the early colonial era.
Mr Ryder said the stock of sandalwood plants they had in their nursery would be divided into two categories.
"The first category of sandalwood will be planted within the surrounding forests and village boundary as part of our efforts to revive the plant," he said.
"In an effort to provide an income generating project for members of the community, the second category of seedlings would be given to community members to plant for their own use.
He said the community was also involved in bee farming as a form of revenue generation."
Meanwhile, assistant divisional forestry officer North, Uraia Racule said the project was assisted by their department through the provision of technical assistance.
Mr Racule said personnel from their Colo-i-Suva forestry research centre had spent some time with the project owners teaching them how to manage their nursery project.
He said communities and villagers could access their assistance for similar community projects by writing to their office in Labasa, adding they also worked with members of the public in reviving other native iTaukei trees.
Posted by Peceli and Wendy's Blog at 5:01 PM