from the Wanganui papers in New Zealand: 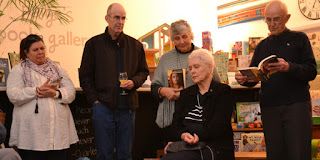 AT PAIGE'S: Author Saisy Gilbert (seated) while husband Garth (right) reads an excerpt from her novel. Also present are Victoria Campbell (left), Brian Gilbert and Lesley Stead. PICTURE / PAUL BROOKS
An historical novel set in 1860s Fiji, more than 30 years in the making, was launched last Tuesday night at Paige's Book Gallery.
Author Saisy Gilbert, writing as Margaret Waddingham, addressed an enthusiastic crowd at the Guyton St book shop, telling a few stories about her family, her own life in Fiji and explaining how the book, The Cliffs of Levuka, came to be.
Paige's owner, Lesley Stead, introduced Saisy and her book, adding that as the night was also the inaugural Book Night, a reading of at least 15 minutes had to take place to register the event nationally and enter a competition to win ... books!
"Margaret has done a magnificent job in writing this book. I have loved every page of it. It certainly does grab you," said Lesley.
Saisy thanked a number of people, including her husband, friends from Broadview where she lives and Victoria Campbell who created her website.
Three people then read excerpts, each vastly different in content. They had no trouble holding the attention of the audience, an interest that translated into sales of the book later in the evening.
Saisy has already started her second novel.
Book Night is designed to motivate hundreds of readers throughout New Zealand to spend part of their evening reading.
***
Review by Paul Brooks
The Cliffs of Levuka covers a lot of ground and engages the talents of a cast of characters as diverse and interesting as the time and place in which the book is set - Fiji in the 1860s, still tribal in its politics and much roughened by the people who populate it.
In such a place has Margaret Waddingham assembled her cast and given them important work to do.
People like Spencer Hunter, whose exploits we follow and whose character we judge.


He is treated sympathetically, so this is the type of man the author obviously wants to be part of the future of these islands. Spencer and the native Fijians, that is. He has left a thriving chandlery business in Sydney in the hands of a capable manager and made his way to Fiji, land of opportunity at a time Australia is experiencing a trade downturn.
Then there are John and Laura Webster and twin daughters Sarah and Jane. They are salt of the earth people who run a boarding house where Spencer goes to live.
Samuel and Ruth Bates run a general store in Levuka. Samuel employs Spencer to manage the store for him.
There are other characters, of course, European and Fijian, creating a panoply of light and dark, good and bad, noble and self-obsessed. There are tragedies and high adventure, moments of tenderness and overwhelming passion. The reader has plenty to chew on in this book.
Running in the background is the history of Fiji, the power struggles of nations and individuals and the realisation that things will never be the same again.
Throughout the book the ominous sound of the drums - the lali - start and stop without warning.
The Cliffs of Levuka is an easy and interesting read. The author has the gift of grabbing the attention of the reader and holding it until the last sentence. The book is available at Paige's Book Gallery.

Posted by Peceli and Wendy's Blog at 3:00 PM