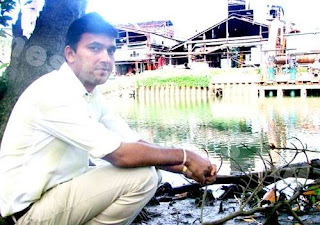 Rakesh Kumar beside the Qawa River in Labasa
from w
I'm sure I've written about the Qawa River about ten times and still there are stories of the pollution from the Labasa Sugar Mill. Here's another one in today's Fiji Times. The good news is that young people are complaining and testing the water. Good on you, All Saints Secondary School students. As in my previous post about the planning for a bauxite mine in Bua, there are trade-offs - industry and a clean environment, but where is the balance?

Man from Qawa River
Maneesha Karan
Friday, June 11, 2010
RAKESH Kumar first encountered the Northern Division's biggest environmental tragedy when he began his secondary education at All Saints Secondary School 12 years ago.A dux during his school days, Rakesh promised himself he would help bring justice to the students and people settled in the area by finding a resolution to Qawa River - which continues to be heavily polluted.

"We used to breathe the stench everyday at school for six months since the beginning of the crushing season in June.

"I used to wonder why the respective stakeholders and authorities weren't taking any action against the pollution. It was affecting our livelihood," Mr Kumar said.

Such an experience and unjust treatment of the environment influenced Rakesh's career path. He went through the Fiji School of Medicine, and was awarded a scholarship to study engineering in public health at an Australian university. Now an environmentalist and public health official, Mr Kumar seems to be nearing his goal to finding a resolution - a case on polluting the Qawa River stands before the Labasa Court.

"The environment is closely related with public health and we would like to help conserve the environment for the best interest of the people.

"The hardest part so far was the complaint received from the principal of All Saints Secondary School. Following that we conducted a survey in 2008 with 1000 students of the school and it was appaling to discover that nearly all the students showed signs of dizziness, nausea, and headache.

"Students' lives are negatively affected and as a result this also impacts their education. Students and those living on the river banks were suffering and I decided something had to be done."

People are desperately waiting for a solution, Mr Kumar said. "Every year during the sugar cane crushing season, the river turns ink black and the marine life disappears. Studies have found the sugar mill discharges huge amount of chemicals into the river."

Industries are important for an economy's development, Rakesh said, but it was unfair to trade public health for an economy's success. "Having industries is beneficial to the economy but there are measures and regulations the companies should heed to control waste disposal. We want to bring Qawa River back as a relaxation place for family outings, where people can once again swim and fish," Mr Kumar said. "People want to have a river which is safe and free from pollutants."

Mr Kumar is being nominated in the Pride of Fiji's Environment Medal category.
Posted by Peceli and Wendy's Blog at 2:45 PM

Goodness, there is a lot of worthwhile info above!