A new kind of community celebration

from w
A commendable project in Fiji is the community Crime Free Day occasions where the towns in Fiji, one by one, have a gathering for the local people to declare their wish for a stable society. Labasa's special day is yet to come.The Labasa Crime Free Town Committee will now launch the event on June 19. Committee president Parmod Chand said the change was to allow time for schools and other stakeholders to prepare for the event. "We will start the launch with a float procession and everyone is invited to take part," said Mr Chand. He said Nabouwalu would be declared crime free on June 16, Savusavu on the 17th, Labasa 19 and Taveuni on June 23.

Labasa Committee finance chairman Satish Kumar said they needed money to prepare the event. "Naseakula, Tuatua and Delailabasa of Zone Three were the first to collect funds," said Mr Kumar. He said there were six zones and each zone representative was given a receipt book to collect funds for the launch. "We need some funds and donation in kind for catering, preparation of banners, decorations and other related activities. We have planned to cater for all the people present at the Vodafone Subrail Park in Labasa for the launching," said Mr Kumar. 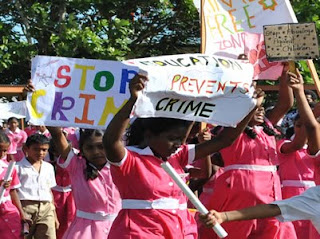 This week it was Navua's turn. On Tuesday Navua town (southwest of Suva had their celebration of a Crime Free Town, a project that is about goodwill between the police and the community, a boost to the morale of police officers as well as an affirmation that Fiji people want a decent society where it is safe to live. It is a commendable project. Navua town is the main trading and shopping center for the people of Serua and Namosi who travel from inland and coastal areas for their needs and other services. It has a very good market beside the river. However Navua often have floods because the land is so low beside the river.

Navua Community Policing committee and Navua Police celebrated the declaration of their district as a Crime Free District. The declaration was held at Vashist Muni Primary School grounds. Exporter of the Year Award winner, Ben’s Trading Company gave a $300 cheque in support of this upcoming declaration. The event involved many school children marching, a vakatunuloa for the officials, policemen on bikes, many people in kalavata shirts, men dressed as warriors. In fact it was like a vanua event but with the purpose of declaring that the people of Serua and Namosi areas want a life where they can feel confident and free of anxiety from crime. About sixteen schools, local communities and community leaders and chiefs from Serua and Namosi Province participated at this historical day for Navua.

I don’t think many tourists actually go into the town area as the main highway by-passes that part of town. Navua town doesn’t get many stories into the Fiji papers. One of our Navua church friends said to me that the celebration was really wonderful and involved thousands of people.

The theme for Navua Crime Free Declaration is Sema Donu mo Vua which connote; ‘one has to link right in order to be fruitful or bear fruit’. This was derived from the word “na vua”-the fruit.

Photos from the Navua event are on the Fiji Police website.
Posted by Peceli and Wendy's Blog at 8:29 PM

It will not truly have success, I feel like this.