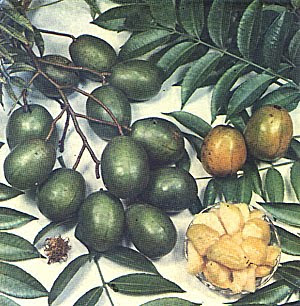 from w
I watched an amazing program on TV today SBS 'The first flower' showing two ways of researching the evolution of plants - one from the rocks in a distant place in China and the other looking at DNA. They came to the conclusion that the very earliest flowering plant was - the anbarella - which is the Fiji wi! Another very ancient flowering plant was arcti frucus and from these nearly all flowering plants developed over millions of years. They said the ambarella came from New Caledonia but of course it is in several Pacific islands.

So I looked up the web and came up with two pieces, one from Tuwawa in New Zealand.
HARVARD GAZETTE ARCHIVES
Oldest Known Flowering Plants Identified By Genes
By William J. Cromie
Gazette Staff
It’s a nondescript shrub with small, unimpressive flowers, and it’s found in only one place in the world – New Caledonia, a minor tropical island in a remote corner of the southwest Pacific. But it has suddenly catapulted to botanical eminence as a key piece in the puzzle of the origins of flowering plants.

Called Amborella, the plant is the one remaining species of a lineage that first appeared on Earth more than 140 million years ago, while dinosaurs still ruled the planet. The other flowering plants, from which it branched, evolved and diversified until they came to dominate Earth at about the same time as the mammalian ancestors of humans were replacing dinosaurs. Flowering plants now number 250,000 different species, including virtually all the vegetables and grains we eat, as well as most of the food of the animals that we consume.

"It’s difficult to imagine a world without flowering plants," says Michael Donoghue, professor of biology at Harvard University. As a result of analyzing the genes from all flowering plants suspected of being among the world’s oldest, Donoghue and research associate Sarah Mathews concluded that Amborella and water lilies are the first two branches on the family tree of flowering plants.

Mathews and Donoghue’s analysis revealed that another early branch includes Austrobaileya, a group represented by one species found only in Australia, and by the more common star anise, which boasts bright red, saucer-shaped flowers.

Tracing flowering plants back so close to their roots ranks as one of the major botanical discoveries of this century. "We knew Amborella was a possible candidate, but to actually pin it down after decades of speculation was a cause for great excitement," Donoghue says. "One of the wonderful things is that three other teams of scientists have come up with the same result."

The other scientists did different types of genetic analyses at universities in the United States, Canada, and Switzerland. Mathews and Donoghue published their results first, in the Oct. 29 issue of the U.S. journal Science. Two other teams published their findings in the Nov. 25 issue of the British journal Nature.

Despite these new findings, plenty of mysteries remain. None of the analyses reveals when the first flowering plant appeared on Earth. Amborella is not the first one but, rather, a representative of the first branch from that unknown ancestor.

Sometime before 140 million years ago, flowering plants, known as angiosperms, diverged from nonflowering seed plants known as gymnosperms. Biologists imagine a tree of life with different groups of animals or plants as branches. Flowering plants branched off from within the branch of seed plants. The first branch within flowering plants separated Amborella from all the rest. Etc.

Copyright 1999 President and Fellows of Harvard College
-------------
Wi (Spondias dulcia)
This tree bears yummy fruit that can be eaten and can grow to a height of 60 feet. Many of us Fijians who grew up in Fiji will remember the wi season when it is plentiful in the markets and also in the forests. You can smell the ripe wi when you get closer to the wi tree. The fruits can be sour when its green, but when its ripe it is sweet and juicy. In the past, the pressed liquid from the stem or bark is used for treatment. In Tahiti, parts of the plant are made in fermented drink to treat diarrhea. In Tonga, the pressed fluid from the bark is used to treat diarrhea.

One of the major uses of the wi is for the strengthening of mothers after the weakness of childbirth. It is also useful for the cleansing of bowels. It also promote sterility, and fish poisoning and is a great remedy for cataracts (eye). Next time you are eating a "wi" fruit, keep in mind the many uses of this plant,which our people used hundreds of years ago.
Posted by Peceli and Wendy's Blog at 3:28 AM