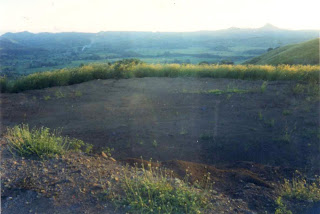 from w
The small piece of land at Vatudamu in the area of Nukutatava is cleared ready to built the new weather tower. A member of our family took this photo about three weeks ago. It's good to know that they are going to fix the road because at present it is very hard on vehicles though people have used feeder roads in this area for over forty years. Vinaka. The location is in the midst of sugarcane farms and the area closer to the road is generally known as Vatuadova. The land is typical babasiga land, low hills, not many trees, often dry, but it can be productive also. I presume the following information from Fiji Sun is mainly a handout from the government.

New weather radar ready by October
5/29/2010
Government intends to complete the construction of the new radar station at Vatudamu hill in Labasa before the next cyclone season, Ministry for Works, Transport and Public Utilities spokeswoman Sainiana Waqainabete says. Ms Waqainabete said the weather system project was significant because it would help in early detection of tropical cyclones affecting Fiji.

Minister for Works, Transport and Public Utilities Colonel Timoci Natuva was in Labasa to see progress of the project. The radar project is expected to be completed by October. The new DWSR-8500S worth $2.5 million will be installed in the district of Wailevu, outside Labasa town.

Ms Waqainabete said the construction of the radar station was intended to improve the standard of the Fiji Meteorological Services and Regional Specialized Meteorological Centre in Nadi. “The construction for the new radar station is expected to complete before the new cyclone season starts in October this year. “The aim of this construction is to bring into place a system that is able to detect and monitor severe weather especially tropical cyclones threatening Fiji from the north,” Ms Waqainabete said. She said the Northern community was fortunate to have the new radar station because it would ensure the community was well informed of weather situations.

Infrastructural construction of the station will cost Government a little over $1 million with the establishment of the road access to the site closing in at $30,000. Ms Waqainabete said a special building with amenities would be constructed at an estimated cost of about $70,000. She said with the assistance of the Fiji Water Authority a borehole would be installed at the site to supply water to the station.
Posted by Peceli and Wendy's Blog at 3:37 PM