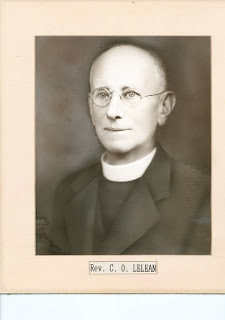 from w
I googled Lelean and found some history on the Old scholars website, plus a photo of the gentleman the school is named after.
From Facebook
Topic: A Brief History of Lelean Memorial School
Displaying all 3 posts.
•
Sakiasi
The Name Davuilevu and its Symbolical Importance

Davuilevu,the name of the site upon which Lelean and other Methodist institutions are built, literally means the Large Conch Shell; the largest Sea Shell found in Fiji. The use of the adjective 'large' in this context implies huge or giant although the literal definition of the Fijian 'levu' is directly translated as big. The conch shell is customarily used as a horn by native Fijians (as well as other South Pacific peoples) to herald important events or to call people together. The Methodist Church of Fiji uses the symbology of this traditional tool of gathering people for the conveyance of the Good News thus becoming the most important Davui or conch of all; the Conveyor of the GOOD NEWS of JESUS CHRIST. The Giant Conch Shell (Charonia tritonis) is the logo adopted by Lelean Memorial School along that same vein of thought.

History
Towards the end of 1942, at the height of Pacific Campaign of the Second World War, the Colonial Authority was issued a command to close all urban schools and surrender their compounds to the Military, to be used as military camps for the war campaign against the Japanese threat. At that time, a notable Missionary Teacher by the name of Mr William Earnest Donnelly, was serving as principal of Toorak Boys' School. While other overseas teachers immediately left Fiji to await the end of the war, the determined missionary principal, Mr Donnelly sent a circular to all members of the senior classes of Classes Six, Seven and Eight of Toorak Boys School, inviting volunteers to come away with him, to continue their education. After consultation with the Heads of the Methodist Church, he was given permission to use the Principal's residence at the Davuilevu Technical School. As a result, he and 50 volunteers from Toorak Boys School in Suva met at the Principal's residence on the 3rd of March, 1943. Their first classrooms were the two Master Bedrooms in the house and the long verandah on the Eastern side as their library. There were only two classes and two teachers; the late Mssrs W.E Donnelly and Semesa Sikivou. This is the house that is presently occupied by Mr Serevi on one side and the School Matron on the other. In the 1943 Methodist Church Annual Conference, Mr Donnelly was given permission to expand his classes along the same ridge and as a result, the boys themselves, with his guidance, built three large bures, where the Teachers' residences presently stand. He was also directed to name the new school, Lelean Memorial School, in memory of the longest serving Missionary in Fiji, the Rev Charles Oswald Lelean, an Australian missionary who served in Fiji for 36 years. Twenty of those years were spent by Rev Lelean as Senior Superintendent of the Davuilevu Mission and Principal of the Methodist Theological College from 1914 to 1934. The school founder, William Earnest Donnelly was a New Zealander, who became a teacher and General Secretary of the Students' Christian Movement in the early 1930s. He volunteered to come as a missionary to Fiji and took over and built up Toorak Boy's School in the late 1930s and early 40s. He remained as Principal of Lelean from 1943 to 1945 when he returned to New Zealand. Mr Donnelly returned to Fiji to establish Ratu Sir Lala Sukuna Memorial School in Suva where he served for three years. He then served at the Levuka Public School, on Ovalau, for a few years before returning to Lelean in 1971 after the Ms Furnival tragedy. He also formulated the Lelean Memorial School motto which is "Seek Wisdom and Spiritual Understanding"
February 2 at 4:31am
Posted by Peceli and Wendy's Blog at 10:29 PM

Great blog on CO Lelean. What a great school now commemorates his name. However he was not the longest serving missionary in Fiji. I think that honour goes to Arthur Small, Australian missionary from 1879 until his death in Suva in 1924 - a total of 45 years. He was Qase Levu from 1900-1924 and there is a memorial plaque to him in the Centenary Church in Suva; he is buried in Suva cemetery. Also Joeli Bulu, the great Tongan missionary, served in Fiji from 1838 to 1878 - 40 years. I also recall that some of the Missionary Sisters served in Fiji a long time. Miss Graham, who started working among Fiji's Indians in 1911 was still in Fiji when I visited her in 1971; she was retired by then. Incidentally CO Lelean's nephew, Arthur D. Lelean, was also a missionary in Fiji for many years (1920s and 1930s) and greatly loved by the Fiji people of Ra. A Victorian Doctoral Candidate Ms Kirstie Close - a descendant of AD Lelean - is carrying out research on her grandfather.

Hello Andrew, hello Kirstie,
You are the experts. I'm a copy and paste lazybones, a bowerbird, collecting stones and feathers and leaves and other people's stories. The blog however is 'my' archive of concerns and collections though limited these days - not like the early postings many of us did ten years ago on Fijilive, Fijivillage when we had a go at Fiji politics!
w.

You do a great job Wendy. Keep it up.

Bula Dr Thornley. Thanks for the correction. I shall proceed to make the necessary amendments. See you when you next visit Wesley Church, Butt Street, Suva. Vinaka and GOD Bless.