About migrating to Australia 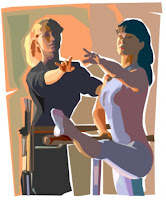 from w
At present numerous international students in Australian colleges are hoping their course will lead them to later permanent residence in Australia - doing hospitality, etc. but there is a tightening up on categories of work now. Certain skills are in demand, but others (often taken by international students in barely competent courses) are no longer a step in the direction of staying on in Australia. So could Mr Qoliqoli Ghosh a dance instructor get in? Not likely! The new list can be found on this website: Weblink: http://www.immi.gov.au/skilled/general-skilled-migration/pdf/new-list-of-occupations.pdf

I read this in today's Age newspaper:

AUSTRALIA is about to become a harder place to get into if you are a dance instructor, piano tuner, hairdresser or chef.

Immigration Minister Chris Evans has slashed by half the list of 400 occupations given an easy ride into Australia in the independent skilled migration program, replacing them with 180 ''highly valued occupations''. Still on the list are medical professionals including dentists, surgeons and nurses, as well as engineers, teachers, IT professionals and welders. But off the list from July will be dance instructors, piano tuners and - significantly - hairdressers and cooks.

''In 2007-08 … of the 41,000 general skilled visas granted, more than 5000 went to hairdressers and cooks,'' Senator Evans said. ''And three-quarters of them had studied in Australia. Our migration program should not be determined by the courses studied by our international students.''

Senator Evans said the new list, developed by the independent body Skills Australia, would ensure the skilled migration program was demand-driven rather than supply-driven.

''We value the international education sector. Its students will still be able to apply for permanent migration or be nominated by employers, but we will no longer almost automatically accept the thousands of cooks and hairdressers who applied under the guidelines established by the Howard government,'' he said.

''The old system served everyone in order, just like pulling a ticket number from the dispenser at the supermarket deli counter,'' he said. ''Our reforms will shift skilled migration from the supply-driven system we inherited to a demand-driven system. We need the skills that are actually in demand in the economy, not just those applicants present with.

''If hospitals are crying out for nurses, they should have priority over the 12,000 unsponsored cooks who have applied and who, if all were granted visas, would flood the market.''

Skills Australia was set up in 2008 with the express purpose of identifying skills shortages. Its eight-person board includes Australian Industry Group chief Heather Ridout, ACTU president Sharan Burrow and a former head of the Prime Minister's Department, Michael Keating.

A separate report released today by economic consultancy BIS Shrapnel finds that population growth is set to slow sharply in response to lower foreign student numbers and a drop in the number of sponsored applicants for short-term work visas.

The change is because the rise in net overseas migration over the past three years came mostly from long-term visitors - such as skilled workers on 457 visas and foreign students - not permanent migrants.

An Australian Industry Group survey also released today finds 75 per cent of employers are dissatisfied with the skills of their Australian-trained workers, with 45 per cent believing their labourers have worryingly low literacy and numeracy skills.

With AAP
Posted by Peceli and Wendy's Blog at 6:30 PM

The Australian government is cracking down on occupations. There are many visas one can obtain to come to Australia, however...

Hello Andrea,
There certainly are many visas and most seem to have fifty pages plus. A friend, reading through her bundle of papers this week, was quite perplexed by the complexity of some of the visa applications.
w.

BULA VINAKA! I AM A 38 YEAR OLD ELEMENTRY SCHOOL TEACHER. I LIVE IN LABASA IN THE PROVINCE OF MACUATA IN VANUA LEVU. I RESIDE IN A HOUSING PROJECT IN A SURBURB CALLED TUATUA. I HAVE 4 KIDS AND WE SO WOULD LOVE TO MIGRATE TO AUSTRALIA BUT DO NOT REALLY KNOW THE NECESARY STEPS TO TAKE TO GET PERMANENT RESIDENCE. I HAVE TRAVELLED TO AUSTRALIA ONCE FOR 3 MONTHS IN 2010 AND EVER SINCE HAVE FALLEN IN LOVE WITH THE PLACE. PLEASE HELP ME AND MY FAMILY GET PR IN AUSSIE. I WISH TO PROVIDE FOR MY FAMILY AND GET THEM A BETTER LIFE. MY E-MAIL ADDRESS IS: e_packs@yahoo.com i think i may know your family here in labasa.... we reside to a family who owns nukutatava that is, SAMISONI and SULIANA anyways have a great day and please do kindly reply!