A tauvu story about an inter-island boat trip 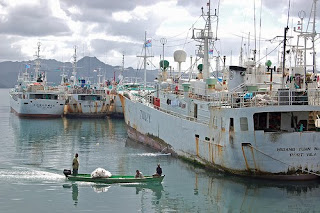 Last Sunday the Lomaiviti group from all over Melbourne met at the Uniting Church at Altona Meadows/Laverton for worship then a meal together. This is the church where Peceli goes each Sunday afternoon for the Fijian service.

During the meal two Lomaiviti women were sharing stories - Tau from Gau and Rai from Nairai who had recently come back to Melbourne from Fiji. Then Peceli sat with them and asked Rai about her holiday in Fiji and the conversation went something like this.

P. So how was your Christmas in your island of Nairai, Rai?
R. Well, it started off badly as there were no boats going to Nairai from Suva, only one going to Lau via Gau. I could get off at Gau and my relative would bring an outboard. So I bought a ticket for that one.
P. Which wharf were you leaving from?
R. At Walu Bay. We were told to go to the wharf at 12 midday Christmas Eve. I expected the journey to be about seven hours. Okay, about a hundred people mainly from Gau and Lau waited on board. They said 4 o’clock it would sail, then 6 o’clock, then 11 o’clock. So we just ate some food and waited. Then the boat moved and we bedded down as best we could, wherever we could. Some people, though they were brought up in villages by the sea, aren’t good sailors so you can imagine what happened as the boat started rocking and smoking a bit. Many got seasick. Anyway we slept.
P. So you got there by early Christmas morning?
R. Not really. I woke up when the sun came up about 6 a.m. and I asked the crew where we are now. I thought we were near a village in Gau. No, he said, we are still near Viti Levu just past Naselai.
P. What happened?
R. There was a problem with the engine so they could only go slow. So we just sat on the decks and everywhere, eating some more food, and people still seasick a bit and I thought maybe another hour of this suffering. This was Christmas Day and we were still on a boat! But the boat just went slower and slower and smoked a lot. We got to one village in Gau at 7 p.m. on Christmas Day. So the Gau people got off, the Lau people got off and I got off because a punt was waiting for me to take me to Nairai, only an hour away. So the people from Gau looked after the people from Lau.
P. I suppose the captain of the ship was accommodated well too?
R. Not exactly. The boat got stuck on the reef then sank.
P. That boat – the Sealink should be called the Sea Sink!
R. The ladies from Lau were yelling out about paying $120 each to get to Lakeka.
P. But you got to your home island, Nairai, Rai?
R. And I had a lovely time on my home island.

Okay, though the story sounds amusing now, but really the passengers were very anxious and frightened during the voyage. Rai really thought about Australia, and that she should have spent ‘Christmas in Melbourne. The boat was overcrowded, overloaded, and was there any safety equipment? Rai was reminded that many inter-island boats in Fiji are like this, and there have been many tragedies of boats sinking and lives lost.
Posted by Peceli and Wendy's Blog at 1:44 PM