Confusion for Indian students in Australia 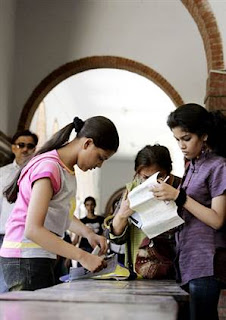 from w
A Punjabi girl knocked on the door the other evening and tried to sell us a scheme to put insulation in the ceiling. I told her we already had old pink bats but she was insistent. I changed tack and asked her if she was a student. Yes. What course? Hairdressing. Oh. Then I just wished her a good day in the only Punjabi words I knew. There are two problems here – insulations were on the TV news that very night as untrained young men do this for a quick buck (the government pay $1200 for each installation making it free for the householder) but four young men died when they touched live wires. And then Indian students want part-time jobs to support their expensive studies so often are in call centres or door knocking and so on.

The second story was about students and courses such as hairdressing. Recently the government has announced that some categories of international student visas will no longer be on the list for the possibility of further stay and on to permanent residence. There are too many students taking certificate and diploma level courses such as hospitality and hairdressing (often rather shonky, costly and badly managed) and some courses are not on the newer desired list for permanent residency. This must trouble many students whose intentions have been not only study but looking ahead to permanent residence. Such college courses are being used to jump the queue ahead of people who fill out their immigration forms offshore and wait patiently for their turn.

The third story in the news in recent months has been of course robbery and violence against Indian students but I won't go into that as I think most attacks are opportunist, though there is a bad element in our cities, and racist, which is to be condemned.

from Australian Bureau of Statistics and doesn't put the emotional TV news spin on it. By the way the courses are expensive, maybe $60,000 a year so this is very lucrative for the tertiary institutions.

The growth of transnational education over recent decades has provided Australia with the opportunity to develop a market for international students, offering courses and qualifications that are accredited globally. The provision of education services is a major export sector for Australia, worth an estimated $13.7 billion in 2007-08. As the number one and two source countries for overseas students, China and India together accounted for $5.1 billion of these exports.

Although overseas students are temporary migrants (they do not hold a permanent residency visa), while in Australia, they are generally counted as part of the estimated resident population. At June 2008, there were 66,000 Chinese and 63,000 Indian students temporarily in Australia. (Endnote 4)

As students may be enrolled in more than one course, and many study English language courses concurrently, the number of enrolments is well in excess of the number of students. Together, students from China and India accounted for 267,000 enrolments (or two-fifths of international student enrolments) in the year to June 2009. In addition to being Australia's largest markets for international students, they have also grown very fast and account for most of the growth in overall student numbers.

Higher education was the sector with the largest share of student enrolments from China (42% in the year to June 2009) with the number of higher education enrolments almost trebling in the six years to 2009. While making up a smaller share (22% in 2009), Vocational Education and Training (VET) enrolments among Chinese students grew even more rapidly (showing a four-fold increase in the six years to 2009), with 'Management and commerce' and 'Food, hospitality and personal services' popular fields of education. English language courses are often studied concurrently with other qualifications and nearly one quarter of enrolments by Chinese students were in English language courses.

Studying in Australia can be a step on the pathway to permanent residency. Of the 44,000 Chinese and Indian born people who committed to permanent settlement in 2007-08, more than a third (36%) had applied from within Australia and most were students.
---------
I do not know the statistics of Fijian and Fiji-Indian students in Australia, and when we talk with Indian students we meet in supermarkets, petrol servos, etc. they all seema to come from India, not Fiji. Anyway, the website Fijilive did write a piece about this.

Aust migrant scheme review to affect Fiji
February 10, 2010 05:23:13 PM
Fiji citizens intending to study or migrate to Australia will need to familiarize themselves with changes to the General Skilled Migration (GSM) program. This follows this weeks’ announcement that Australia axed 20,000 migrant applications in a major overhaul, aimed at clamping down on foreign students gaining permanent residency through courses such as hairdressing and cookery.

Australian High Commission spokesman in Suva, Dennis Rounds, confirmed the changes made to the GSM program. However, he said this has not altered student visa regulations.

“Anyone studying or intending to study in Australia should ensure they meet the current visa requirements,” he said.

The MODL prompted a massive influx in foreign students attending courses that put them in line for permanent residency. Such courses included cookery, hairdressing and accounting.

But Rounds noted that the revocation of the current MODL will not affect those who at the date of the announcement, hold a skilled-graduate visa. Also according to Rounds, it also won’t affect those who have yet to apply for a permanent or provisional GSM or have a pending GSM visa application lodged before 1st of September, 2007.

Evans earlier said the reforms, which follow a sudden rise in Australia's Indian population and an embarrassing rash of attacks on students from the country, would give priority to migrants with higher skills. The new measures are likely to weigh on Australia's large overseas education sector, which successfully targeted Asian students to become the country's fourth largest earner of foreign money.
Posted by Peceli and Wendy's Blog at 12:03 AM

Australia is biting off its nose to spite its face. Even if you accept that the policy shift had to be made, why did it have to be done so suddenly? Current and prospective students have been left feeling uncertain of what the future holds for them as the Australian Government makes it up as it goes along.

Yes, Australia offers high quality education options for international students, but so do other markets. Australia may have handed its competitors market share on a platter.

Hello Tony,
It did come suddenly and certainly students will wonder what their options are. Trouble is quite a few of them enrolled into colleges that were not respected educational institutions but were just there for money-making from the institution and for opportunism from the international student. The recruiters need to discern between universities, TAFE colleges and some of the others which are 'fly by night'.
w.

The study abroad industry worldwide has continued to grow at a remarkable pace and continued growth is anticipated. Economies have been growing rapidly like India, in recent years tremendous opportunities are available for education agents as the industry expands with large numbers of people joining the ranks of the middle class and being able to afford to study abroad.

Get Genuine Ways To Earn Money Online With Payment Proofs. You Can Learn How To Make Money With Traffic Improvement Tips and make $100 every day .So That You Don't Waste Your Time And Money.more details visit ,click here

Eurasia Education link Pvt. Ltd. is not just an education consultancy directly partnered with the best of the best Universities around the globe but it is more than that!! as it is an initiative taken to provide the students a companionship throughout their journey of getting admitted in their dream universities abroad.
Website- Study abroad scholarships