Sit up straight and do what you're told! 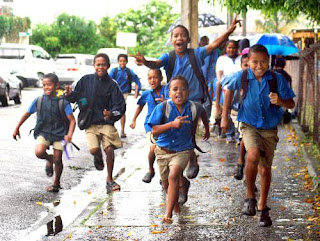 from w
Orders from the top (in Suva of course) now require Fiji children (in the bush, in the islands, in the towns) to start school at 9 a.m. instead of 8 a.m. and still finish at 3 p.m. So they lose one hour of schooling every day, so what happens to timetables and subjects deemed to be less important? Will they push art and music and physical education aside now? Seems like this directive from Suva hasn't been thought through very well. Are the bus companies happy about this? What about families who drop children off on the way to work? Will this new ruling change when daylight saving moves in late April?

Teachers however are expected to be at school by 8:00am.

Education minister Filipe Bole said the changes had to be made because of the extended daylight savings in place that is affecting school children and their parents who have to prepare for school while it is still dark.

Bole said this was especially so for those who reside in interior places, who could be at risk because they travel to school under near dark conditions.

Senior education officials have been instructed by the Permanent Secretary to immediately inform their respective schools on the change.

The Ministry has also advised the Land Transport Authority about the new school hours so that transport providers are aware.

The daylight savings began last year on November 29 and will end on April 25.
Posted by Peceli and Wendy's Blog at 4:30 PM