Land snakes are not common in Fiji 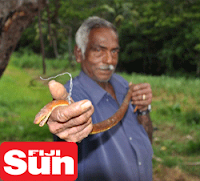 from w
Only once did we find a land snake up a tree near the beach at Nukutatava and the kids took it to one of the high schools to show the teacher. But that's the only time. Of course there are plenty of the striped sea snakes. So here is a story in the Fiji Sun a few days ago about a man finding a land snake near Labasa. So do you kill a snake or not? I guess if it's not poisonous it's okay, but how do you know! I don't know if the facts are right in the article below, but certainly there's a temple near Labasa with a rock and a belief in a snake god.

His comments come as Ram Naicker, of Vunika, Labasa, killed a snake outside his home on Tuesday. Mr Naicker, 67, usually visits the forest several kilometres away from his house to harvest fruit and vegetables. He said while he was on his way to the forest on Tuesday to pick fruit, he saw a thin, dark brown snake hanging from a star fruit tree. “When I saw the snake I quickly ran to my house, picked up a spear and killed it,” he said. Mr Naicker said he did that to stop other residents being bitten by the snake.

But Mr Maharaj said, “we see and respect the creature because we see that as a form of God.”

Snake gods adorn and are celebrated in all Hindu temples. From many centuries Snake gods have played a prominent role in the lives of most Hindu people. The female snake god is called Nagarani and the male god as Nagarajan and idols of both gods are placed in all the major Hindu temples. In most depictions Lord Shiva, wears Nagarajan on his neck and the Lord Krishna has made the snake god Adhisheshan as his bed. Hindus believe snake gods are associated with wealth and healthy life and they act as a great security when people meet difficulties in life.

“I would like to request the people not to disturb or harm the snakes in the forest,” Mr Maharaj said. He said a Hindu belief was that if anyone killed a snake, he commited a sin and would surely face the consequences. Mr Maharaj said in the past there were few people who tried to play with snake or harmed them and they had ultimately faced many health problems.
Posted by Peceli and Wendy's Blog at 11:17 PM

In the US is not usual to find land snakes however in far places like Nukutatava you would be surprised to know the rate of people bitten by this snake.