from w
I noticed this item in Matangi Tonga, re China in the Pacific. Like Greeks bearing gifts I reckon.

Thirty vehicles from the Chinese Government were handed over to Tonga for the Coronation celebration of HM King Tupou VI on 27 June.
The vehicles included 10 cars, 15 SUVs and five 35-seat buses with a Chinese maintenance team to train drivers in Tonga.
The Chinese Ambassador HE Mr Huang Huaguang signed the handover certificate with the Minister of Finance Hon ‘Aisake Eke with Crown Prince Tupouto’a ‘Ulukalala present at Taliai Camp.
HE Huang thanked the Tongan Royal Family and Tongan Government for supporting the development of China-Tonga cooperation and friendship.
“China attaches great importance for His Majesty’s coronation. Chinese President XI Jinping appointed HE Mr Li Jinzao, Chairman of China National Tourism Administration to be his Special Envoy to attend the ceremony,” he stated. 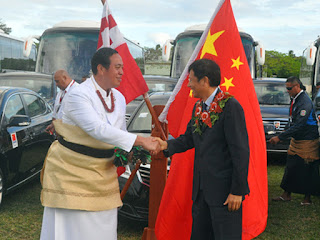