from w
Not surprised as many of them seem to be similar as if someone did indeed muck about with the individual entries to the competition.  I still don't like any of them much. Brown is certainly out for a flag. Others really have nothing significant about them to represent Fiji.  I'm sure there were much more appropriate and beautiful designs submitted such as in the photo here. 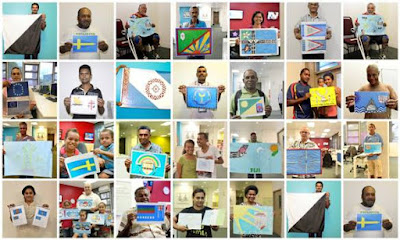 A committee member overseeing the public competition to design Fiji's new flag has confirmed that members composed the 23 final entries themselves, selecting elements from submitted designs.

A selection of the finalists of Fiji's new flag
Photo: newfijiflag.com
Speaking on condition of anonymity, the National Flag Committee member says the group reports directly to the Attorney General, Aiyaz Sayed Khaiyum, and was told to go back to choose more after it selected five final designs.
Of the 23 final entries, nine feature a triangle emerging horizontally from the left, while five feature an identical wave and sail design, four have an identical boat on a straight line, and four others feature yellow stars or a sun.
The public is now giving feedback on the designs.
At the end of June, the entries and feedback will go to Cabinet for consideration before a vote in parliament.
Despite ruling out a referendum on the change of flag, Mr Sayed Khaiyum says the process has been consultative.
Some Fijians who entered their designs in a nationwide competition to select a new flag are reportedly unhappy that their designs have been modified.
The leader of the Sodelpa Youth Council, Peter Waqavonono, says the process has been undemocratic from the start because the government ignored a petition with 2,000 signatures to take the matter to a referendum.
Mr Waqavonovono says reports of the flag committee amalgamating entries have further alienated the public.
"Given the designs that have popped up thus far, a lot of people have shared their opinions that they don't think that they were part of the process in designing the new flag. After 1000-plus entries that went in it seems like the committee decided to come up with their own design."
Peter Waqavonovono says he is organising a peaceful march in October against the new flag.
Posted by Peceli and Wendy's Blog at 1:21 AM