Samoan teenagers - a story of endurance

from w
Among the trivia and under-reported stories in the Fiji media, - there was one story that caught my attention - three Samoan teenagers survived fifty days drifting at sea until they were rescued. Now that is epic and a very good story should be written about it. 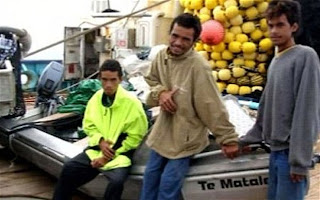 Filo Filo and Samuel Perez, both 15, and 14-year-old Edward Nasau resting on a tuna fishing boat after their rescue,
Bonnie Malkin
By Bonnie Malkin, Christchurch 9:45AM GMT 25 Nov 2010

The youths, two aged 15 and one aged 14, had disappeared on Oct 5 in a tiny aluminium boat from the remote Atafu Atoll. The trio were presumed to have drowned after unsuccessful searches by the New Zealand Air Force and Samoa had held a memorial service in their honour. But, in a remarkable stroke of luck, the teenagers were spotted on Wednesday by a New Zealand tuna fishing boat which was far off its usual course. Samuel Perez and Filo Filo, both 15 and Edward Nasau, 14, had drifted 800 miles and were in waters northeast of Fiji when they were rescued.

The first mate of the fishing boat the San Nikunau said that the boys had only eaten one seabird and a couple of coconuts during their time at sea.

In the days before their miraculous rescue, they had started drinking seawater, because it had not rained for some time, and would not have survived much longer, he said. However, the teens had sustained surprisingly few injuries during their ordeal. They were thin and sunburnt, but otherwise fairly healthy and in good spirits.

"We got to them in a miracle," Tai Fredricsen, first mate of the San Nikunau, said. "Yesterday we saw a small vessel, a little speed boat on our bows, and we knew it was a little weird," he told the Fairfax website Stuff.co.nz Mr Fredricsen said the boat was initially spotted when it was about a mile off the bow. We had enough smarts to know there were people in it and those people were not supposed to be there. I pulled the vessel up as close as I could to them and asked them if they needed any help ... they said 'very much so'. They were ecstatic to see us."

Luckily, the San Nikunau had a medical officer on-board, who knew not to feed the trio too quickly. Instead they were put on a drip before slowly being given sips of water and small pieces of fruit that their bodies could absorb. Soon they were strong enough to eat a full "kiwi breakfast", Mr Fredricsen said.

The boys are expected to be put ashore at Suva, the Fijian capital, in the next 24 hours where they will be checked at a hospital. 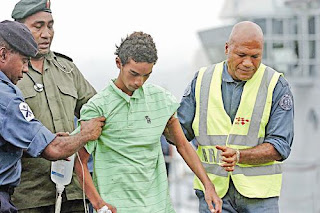 One of the three Tokelau teenagers rescued after drifting for 61 days, Etueti Nasau, 14, is escorted by Fiji Navy officers and military doctor at the Naval Base in Suva yesterday. Picture: IVAMERE RASABASABA
AFTER 61 days of drifting at sea and numerous search and rescue missions, three Tokelau teens were finally rescued when a New Zealand fishing vessel spotted them early this week. In a media briefing yesterday afternoon, Fiji's navy commander Francis Kean said they successfully transferred Etueni Nasau, 14, Samu Pelesa and Filo Pelesa, both 15, from the San Nikunau, on to the naval vessel, Kula, at 4am yesterday in Fiji's exclusive economic zone."The boys had left their homes in Atafu Village on September 24 in an aluminium boat to visit relatives at Nukunonu, a neighbouring island in Tokelau. Along the way they ran out of fuel and the boat started to drift," he said.

"With the rainfall we have experienced, one can only imagine the state of the seas they endured during the journey. Even the commanding officer of the Kula is in awe of how they survived the 61-day ordeal," said Mr Kean. He said the teens lived on flying fish, a seagull and sea and rain water. "A doctor who accompanied them to shore has been injecting fluids into their bodies to rehydrate them. The doctor has said it is still not the right time for them to eat solid foods so they will continue to take in fluids until their bodies are ready. "I thank God for the second chance given to the three teenagers," Commander Kean said.

He said the boys' families had been informed and that immigration issues would need to be sorted between the New Zealand High Commission and the Immigration Department before they could return home to Tokelau.

Also present at the Stanley Brown naval base in Walu Bay yesterday to receive the boys were officials of the New Zealand High Commission, including Phillip Taula, the acting head of mission. The boys are undergoing medical treatment at the Colonial War Memorial Hospital.
Posted by Peceli and Wendy's Blog at 11:38 AM

I totally match with everything you've written.