from w
One of our boys often says that teenagers and adults need to find their passion and do their best at it - whether it's music, sport, writing, being a pastor, cooking. Find something you really like. So here's a girl that loves drumming.
from Fiji Sun
Direca dreams of becoming a drummer
11/23/2010
Seaqaqa lass Maria Salome Direca is the only female in the school's all-boys band of drummers who usually perform for public functions in Labasa. She marched elegantly beating her drums artistically to the rhythm of the rest of the drummers.

The eight-member band from Nabala Junior Secondary School performed a special last Friday to mark the launch of the Blue Ribbon campaign in Labasa.

Originally of Nakavika village, Miss Direca who is proud of her talent said she joined the band to test her abilities as a girl in drumming. And so far she has enjoyed all her performances because she outshines the rest of her band members. Miss Direca who is the head girl of the school said the band is meant for those students who participate in cadet training.

However, they now perform for functions that are related to the educational curriculum.

Miss Direca who is now passionate about drumming dreams to be a band member for either the Police or Military band. "I don't mind being the only girl at the school band because it builds my confidence in performing before people. I used to be a timid person before I joined the band but that has changed now," said a smiling Miss Direca.

When she is free at school, she takes time out to practice her drumbeats and competes with other band members. "Just playing the drums makes me feel alive and happy. I tend to be in my own world filled with peace when I play the drums."

Miss Direca said girls can do anything if they put their heart and mind to it. "Playing drums is not only a boy's hobby as it can also be girls. It is only a matter of enjoying what you do in order to be happy."

SUN North caught up with her after a performance at the Blue Ribbon campaign launch where she made a plea on behalf of the child abuse.

Miss Direca pleaded with the community and leaders to highlight the plight of children who have been abused physically, emotionally and psychologically.
----------

And here's another young person from Labasa with a different passion.
Again from Fiji Sun.
Labasa lad for NZ meet
11/17/2010
A 23-year-old resident of Tuatua, Labasa, is happy to be one of the Labasa Okinawa Goju-Rya Karatedo Federation reps selected to represent Fiji in the second Oceania tournament in New Zealand next month. Ashrit Lal said he worked hard to win a spot in the tournament. He said he had been practicing karate for 12 years. He said karate was part of his hobbies and interest and it had allowed him to visit a new country.“I am happy to be one of the students chosen to represent my country (Fiji) in the second Oceania this year,” Mr Lal said.

From the 15 students, Mr Lal is the only one rep from Labasa. But he needs help.“I am looking for a sponsor. If I get it one I will do my best for me and my country,” Mr Lal said.

And, another passionate person from Labasa, a musician this time. 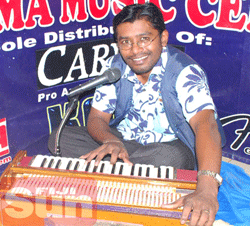 Kumar breathes music
10/12/2010
There is more to life than eating, working and sleeping, says musician Amit Kumar of Batinikama, Labasa.Mr Kumar, 29 is a well-known musician in Labasa, who started his singing career at the age of 10."I began singing ghazals and popular Bollywood Hindi songs and later, my interest in singing bhakti bhajans grew,” Mr Kumar said.“I was inspired by my late grandfather, Sant Kumar, who was also a musician. My life is deeply rooted into music and without it, I feel my life is without happiness.”

He believes that God has blessed him with the gift of singing and playing Indian musical instruments. “With this talent I have performed a number of shows for various charities and religious organisations throughout Fiji,” he said.“I have released four albums and I am on the verge of recording my fifth volume.” Since Mr Kumar took his singing career seriously he has won three awards.

In 2009 he received the best critics award during the Procera Music Awards. In 2008, he was second runner-up at the Vodafone live talent quest run by Radio Fiji 2 and Radio Mirchi. In 2007 he scooped the best kirtan singer award.

“My aim in life is to upgrade my skills in classical singing,” he said.“If I am given the opportunity to study music overseas I will gladly do so. I have seen many youths listening to music but there is no sign of creating music.” He is urging young music enthusiasts who have an interest and talent in music to make use of it.“Take your life to a new direction. Do not engage yourselves with the same daily schedules and make use of your interest in music,” he said.

Mr Kumar is an employee at the Fiji Islands Revenue Customs Authority branch in Labasa.
Posted by Peceli and Wendy's Blog at 2:46 PM