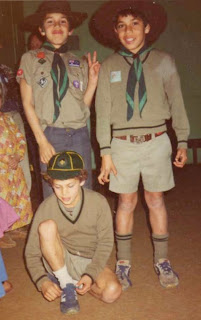 three scouts - a few years ago.
from w
I read about the boy scouts camp in Labasa and wondered where the 'old' kind of scouting has gone. When Peceli was a scout in Labasa in the 40s the boys went out into the bush with a cane knife and camped there, finding food, making a shelter. No matches, no blanket, just a cane knife. Camping then was not in the town area at all. In earlier years our family was associated with the scouting movement - Peceli was a chaplain to scouts at one time, our three boys were all scouts and two attended jamborees such as in Lautoka and at QVS. It's a really great movement and the Girl Guides also of course. It would be good in Fiji if scouts and guides had groups established through the schools - much better than cadets with all those fake guns and marching around!
First for Labasa

KAILA - A camp with a difference as scout boys of Labasa primary schools took to camp their different knowledge and skills of survival. About 50 boys from five different primary schools spent the weekend long camp at the Naseakula district school ground where they build their own tents with tree branches as support body.

Scouts leader and district officer Dharmendra Datt said the camp was to teach boys basic life's survival skills. "They also come in to share their ideas of basic survival skills and we as teachers share with them our ideas.

"The weekend camp is the first for the primary schools in Labasa and will get bigger next year," Mr Datt said.

He said the camp was basically to teach the boys to be independent.

"A lot of children nowadays don't know anything about basic survival in using the environment around you to supply your basic needs.

"This includes lighting up a fire, building a camp using tree branches and other important things that one will need to do to survive especially alone," Mr Datt said.

"This is the first time for the primary schools to have a scouts camp together and the boys learnt a lot from building chairs with the available wood, cutting and standing a flag pole, cooking, washing dishes and building tents.

"The students learnt quickly in the three days camp and that's what's scouts all about to produce independent people who can survive in any kind of surrounding," Mr Datt said.

As part of the weekend camp, the students also learnt to put together a bon fire.

"The boys cooked their own food with the supervision of the teachers and they also had to build tables to put their dishes on.

"Some used branches to hang their cups from so these boys have brilliant ideas about survival," Mr Datt said.

He said the event would now become an annual one for the district of Macuata.
Posted by Peceli and Wendy's Blog at 12:45 PM

I am so glad to see news of this camp in the Macuata District, Wendy. As you say, so much of those survival skills are not taught any more.

Hello Annie,
The Boys Scouts movement seems to have lost its popularity these days but honestly, they did the 'environment' and 'bush awareness' thing long before the Greenies took to trees!
W.