Tonga at the polls 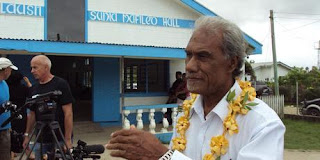 from w
Barely a mention in the Fiji media (if at all) but Tonga has shown a new face in the transition from nobility ruling to a partial democratic face. Malo lelei.
from a NZ source: (with sections deleted)
Power to the people
By Audrey Young
5:30 AM Saturday Nov 27, 2010
Tonga democracy leader Akilisi Pohiva in Nuku'alofa yesterday after an election delivered democracy-aligned candidates a landslide victory. Photo / Audrey Young
A home-grown form of democracy - with some unorthodox elements - sprang into life in the kingdom this week.

Enthusiasm for the kingdom's first democratic elections was everywhere on Thursday, not least at the Lapaha polling station, the site of the old capital of Tonga, where National MP John Hayes was an official observer.

Isapela Hufanga, who works at the Reserve Bank, was happy to talk outside the polling station in the local community hall. But it was hard to pin her down.

She continually interrupted herself, waving and greeting others streaming in to pick a representative for her area, Tongatapu No 10, as soon as the polls opened. To some it was a sombre day; to Isapela it was thrilling, to everyone it was history.

Asked whether a commoner should lead the Government rather than a noble, she replied yes: "I'm sure it is what the King expects."

She was dead right. It is now emerging that it was the King who ordered his brother, Crown Prince Lavaka Ata 'Ulukalala, to drop out of the contest to become one of the nobles' representatives. And it was almost certainly on his instruction that none of the nobles should try to be Prime Minister.

Had the Crown Prince been elected, according to many Tongans, the Parliament could have felt obliged to elect him Prime Minister, a result which could have undermined the integrity of the democratic reforms.

The reforms happened because of three remarkable men. The first is politician Akilisi Pohiva, a former trainer of teachers, whose name is synonymous with the democracy movement in Tonga. Vilified as a traitor when he faced and defeated sedition charges in 2007, Pohiva is now triumphant after 30 years of campaigning, 23 of them from a lonely seat in Parliament. Yesterday his people were literally dancing in the streets when he arrived at party HQ to begin the process of Government formation.

The figure probably given least credit for the new Tonga is King George Tupou V whose progressive views are overshadowed by his eccentricities. Nonetheless his long held ambition to surrender his executive power to the people is highly unusual.

And in his old boyhood friend Prime Minister Feleti Sevele he had an accomplice and commoner in the legislature who ran a thorough consultation process and turned the dream into law. Each man played a vital part in the biggest overhaul of the constitution in 135 years.

The King has relinquished the right to appoint the cabinet, a job given now to the Prime Minister.

Any political decisions in his name, including the royal assent on legislation, will be on the basis of the advice from the Prime minister.

Interviewed on ABC Australia, King George said he had always wanted to implement reforms for the country."It's a very practical idea in that our political life has to travel at the same speed, the same level of development as our economic life." The democratic reforms have been delivered at a pace which was clearly unimaginable 10 years ago to the outgoing New Zealand envoy. They were hatched by the King while he was Crown Prince.

Soon after taking over the affairs of his ailing father, in 2006 the prospective King sacked Prince Lavaka who was Prime Minister, and installed his friend Sevele, the first commoner to hold the rank.

King George, who went to Kings School and Kings College in New Zealand, said he would not have wanted reform if he had been educated only in Tonga.

It is a fascinating interview: it shows someone who has thought carefully and deeply about the handover for a long time. He also acknowledged he had come under pressure over the reforms - but not from "below." "The pressure I felt was the pressure not to change which was exerted on me from my own class in society."

McCully is reasonably close to Tongan PM Sevele, hosting him at his own Northland bach a couple of months ago. He says people under-estimate how difficult it was getting the reforms through.

"The scale of the transformation they have been going through is huge, moving from being a monarchy to a modern democracy in a very short space of time and it has only been because of an alignment of a unique series of events particularly the fact that the King had decided to support the reform process and had a commoner Prime Minister who was a friend of his who was able to carry it through the political process."

Nuku'alofa lawyer Dana Stevenson said she was taking a "wait and see" attitude to the reforms and had concerns people's expectations might be too high.

"There is a lot of excitement and optimism about this new process we are embarking on but I'm not sure whether people realise it is not going to change things overnight, that this is only the first step in the process of the move towards democracy.

"It's going to be a much longer evolving process. It's going to take a number of years, if not decades, for it to evolve and this is only the first step."

When and how a government is actually formed may take some time. How the nobles exercise their power is unknown as yet. They conducted their own election in the privacy of the Palace Office, a red-roofed house in the grounds by the King's town palace, each noble seated on a red velvet chair with royal insignia.

In a closed door ritual, votes were cast at 12pm, counted at 4pm and announced to the world by the emergence of the successful one for a group photo. They were joined by the whole crew for a bigger group portrait.

Among their number was Lord Ramsay Dalgety, a controversial Scottish QC appointed by the King to a new post, Lord Chancellor. He heads an advisory group which recommends judicial appointments.

Perjury charges against him relating to evidence he gave on the sinking of the Princes Ashika were dropped this month because no one had signed the paperwork.

The King has granted him rights to vote with the nobles but not to stand.

The changes to judicial appointments is seen as the most worrying feature of the reform package because it is a step back from modern practice and potentially threatens the independence of the judiciary.

A recent law setting up a Judicial Service Commission for the appointment of the judiciary, involving the Attorney General, the Chief Justice and the president of the Law Society has been overturned.

The King's view is that the new appointments procedure will preserve the independence of the judiciary by keeping it away from the Attorney-General and other members of the executive. The jury is definitely out on that one.

That feature, together with a structure that could allow a noble to emerge as PM - as looked possible earlier in the week - makes Tonga's system unique.

New Zealand's present High Commissioner, Jonathan Austin, is adamant that the outcomes of the new system are not for others to criticise.

"I don't think it's up to us to judge," he said, when the speculation that the Crown Prince was standing was at its height. "It's their system, this is the system they arrived at, that's the result that they've got. If they want to change it, they're at liberty to do so."

(section deleted).
Posted by Peceli and Wendy's Blog at 9:22 PM

What a load of crap....the King & Sevele had nothing to do with the change!!! They just realised after 2006 that the people have had enough and wanted True Democracy!