Where do they get these speakers? 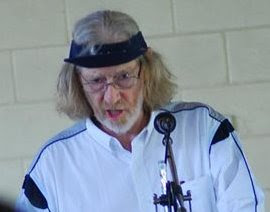 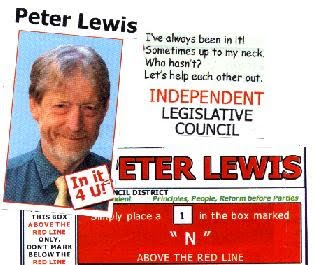 from w
On Fiji TV online this evening I watched briefly a lecturer who is a former politician from South Australia talking about a topic I'm sure he knows little about. He's a maverick kind of fellow they say. Hmmm. This occasion, he read his notes, his hair was indescribable and he had a kind of cap on. Not very professional. A poet could have delivered a better paper. Fijiradio wrote it up as:
Lewis questions Aussie and NZ stance on Fiji
Tuesday, April 27, 2010
A former member of the South Australian Parliament has questioned the on going sour relationship between Fiji and its Trans-Tasman neighbors.

In a public lecture today on Coups and Constructive Commitment, at the Fiji National University, Peter Lewis challenged those present to decide whether or not Fiji needed the 2006 coup. However, Lewis says it is up to the people of Fiji to decide if the coup has made things better or worse for Fiji. He says he does not understand why the relationship between Fiji and Australia and New Zealand differ when compared to other countries that are worse off.

Lewis highlighted that there is no bloodshed happening in Fiji compared to other countries and yet Australia and New Zealand has better relationships with these other countries and not Fiji. He says Fiji seems to be doing well under the leadership of someone who gained absolute power without elections, and the best way forward is to take the current Prime Minister at his word and remind him of it at regular intervals, through objective remarks.

Fiji Broadcasting Corporation
Posted by Peceli and Wendy's Blog at 2:03 AM

His appointment to the University would have carried obvious pre-conditions.

I doubt that he is on the staff, more like a blow-in. He just seemed to be reading a hand-out. A speaker needs to engage with an audience, look them in the eye, say something new or well-thought out, have expertise in the topic. The audience needs to be mainly comfortable but occasionally uncomfortable!
It's a different thing to throwing a few impulsive opinions into a blog posting!
w.

If you want a vavalagi point of view there's a good discussion paper here:
http://rspas.anu.edu.au/papers/melanesia/discussion_papers/09_06_norton.pdf

The philosopher John Gray (London School of Economics) writes this of the Bolsheviks - they were "practitioners of utopian social engineering which aims to reconstruct society by altering it all at once...Society as it presently exists is beyond redemption. It must be destroyed in order to create a new way of life. One difficulty of utopian social engineering is that it contains no methd for correcting mistakes. The theory that guides the construction of Utopia is taken to be infallible; any deviation from it is treated as error or treason...However, given the fact of human infallibility, the model is sure to contain flaws, some of which may be fatal".
- from Black Mass: Apocalyptic Religion and the Death of Utopia, Penquin 2007.
Need more be said.

Thank you Andrew for giving our humble blog some food for thought. Certainly trying to have a crime-free town in Fiji is more than declaring it so. The flaws are there in old and new ways of leadership. Speeches full of cliches and abstract words don't help either. Telling true stories from the lives of people are a better way to make people think. However I will give credit where it's due in the current situation as there are some projects that are happening that 'can take the country forward' (as they are known to say), but as you said in the Bolshevik model, you don't criticize everything, break it all up, and expect perfection. Now that's a ramble - I am a bit tired tonight.
Wendy

I wish all our lecturers were like him. Strange and kooky? I'd go to that class any day ;P

Hello Wilson,
Don't get me wrong about quirky, maverick lecturers. I was once an art student and we had some beauties! It was the content of his talk that was irritating.
W.