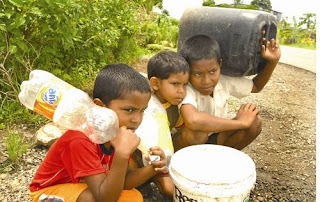 picture: children in Suva of children waiting for the water truck because the taps have gone dry....again.
from w
There's not much in the Fiji on-line news this week, the usual spin from one paper heaping a bit of praise, and the usual silences on some issues. However there has been talk about 'poverty' using graphs and charts which are not realistic when you consider that there's a difference between 'rural' and 'urban' and also going by an amount of dollars doesn't figure when you also consider other factors.

There is abject poverty where there is a desperation in living that a family cannot send their children to school, cannot drink clean water, perhaps live in a lean-to house that is intolerably hot. Then there is a moderate kind - subsistence living - where you do not use much cash in hand, but live off the land, sea and river. Peceli hs told me of his childhood in Naseakula where there was often an exchange of things - coconuts given to the Chinese baker for bread, etc. Subsistence living can be quite healthy. Also to me, poverty is not just about physical things, but there can be a poverty of spirit and a sense of hopelessness that has little to do with money or even owning physical objects.

45% of people in povertyFrom Fiji Times
Wednesday, April 21, 2010
Forty-five per cent of people in Fiji are living in poverty, this was revealed at a workshop on poverty alleviation impact assessment. The figures, derived from the yet to be released Household and Income and Expenditure Survey (HIES 2008/2009), was presented to the workshop by the Poverty Eradication Unit of the Office of the Prime Minister. This would mean that 360,000 people in Fiji are living in poverty.

Also revealed at the workshop was the fact that the Government, between 2000 and 2008 had spent $1.5 billion on poverty eradication programmes but the figures from the survey had shown that instead of eradicating poverty, levels had grown since 2000.
The $1.5billion were budgetary allocation provided by the taxpayers.

Latest economic statistics provided by the Poverty Eradication Unit indicated that income inequalities as well as the percentage of the population living below the poverty line may have worsened. Workshop facilitator Dr Howard White of the International Initiative for Impact Evaluation told the workshop that the level of poverty has increased from the last survey done in 2007 which showed that poverty was around 32 per cent. He said Fiji suffered from the twin-paradoxes of poverty in the midst of plenty and rising poverty accompanying rising spending on poverty alleviation programmes. He said the wealth of the nation was not trickling down to the grassroots but was shared among a few. Dr White said that there was a need to promote programmes which would allow people living in poverty to have equal opportunities to goods and services enjoyed by those in the high income brackets.

Permanent secretary in the Office of the Prime Minister, Lieutenant-Colonel Pio Tikoduadua said White was brought in to assess the impact of poverty in Fiji. He said Government wanted to see the proportion of Fiji's population living below the poverty line drop from 35 per cent to less than 15 per cent by 2020.

Dr White, who has previously led the impact evaluation program of the World Bank, will also be looking at ways in which he will be able to assist Government in reviewing its pro-poor programmes so as to reduce poverty to a negligible level by 2015 as mandated by the Peoples Charter for Change, Peace and Progress.

Fiji’s Council of Social Services says poverty numbers are confusing
Posted at 23:14 on 21 April, 2010 UTC
Fiji’s Council of Social Services says there’s confusion over poverty numbers in the country, following a workshop placing the level at 45 percent. The Household and Income and Expenditure Survey 2008/2009 is yet to be released, but the Fiji Times reports the data was presented to a poverty alleviation workshop this week. The executive director of the Fiji Council of Social Services, Hassan Khan, believes the new numbers to be correct or in fact even closer to 60 percent. Mr Khan says there should be a more uniform measuring system.“Whenever we talk about poverty people immediately think of a money line. If you do not earn up to 15,000 dollars or less you’re below the poverty line. But when we define poverty we also look at how are health services, water supply, electricity, roads [etc]. In the absence of an elected parliament one is not able to really to have a more comprehensive picture.”Hassan Khan says money spent on poverty alleviation is not trickling down to the grassroots level.
News Content © Radio New Zealand International
PO Box 123, Wellington, New Zealand

Fijian communities debts a concern
Publish date/time: 25/04/2010 [12:01]
Store credit, hire purchase and personal loans are the most common forms of credit used by rural Fijian communities and 50 percent of income is being used to pay off such debts. In their financial capability, financial competence and well being in Rural Fijian Households report, UNDP Chief Analyst Jeff Liew revealed on average a rural Fijian household has an average of a monthly debt of $150 to $200. The report stated that this sees nearly half of income being used to pay off this debt and as a result this means lesser money for the household everyday use. The report went on to highlight that this would mean that the families go back to shops and take food and household items on loan and the cycle continues. Liew also mentioned that as a result, nearly 80 percent of rural communities in the country are somehow in debt and the only way to tackle this problem would be to have more financial literacy programs. Following the release of the UNDP report, the government agreed to financial literacy being taught to primary school students.
----------
Now I think the third article gets somewhere because 'rural' and 'urban' indebtedness is something that needs to be considered carefully as so many people seem to be living on credit, one year to the next. Several years ago, when I was considering writing a thesis focussed on some aspect of life in Fiji, I was told that the topic of 'rural indebtedness' could be a good topic for me to investigate, but I wasn't going to intrude there as it was too sensitive a topic. I opted for ethnomusicology, a much safer topic! Another topic briefly touched upon this week in the Fiji media, probably in some speech or other, was about kerekere with the speaker saying, it ought to go. The kerekere network of obligation to help and to receive can be an excellent backup system, though of course it can be abused and the hard workers in Suva give up their gold watches, and empty their pockets when they visit the village! But...should our model for Fiji society have to be the Western financial one which is mainly everyone for themselves eh?
Posted by Peceli and Wendy's Blog at 6:49 PM

keep up the blog, it's important to disseminate this information, thanks for going to the trouble to do something worthwhile.

Pretty effective material, much thanks for your article.