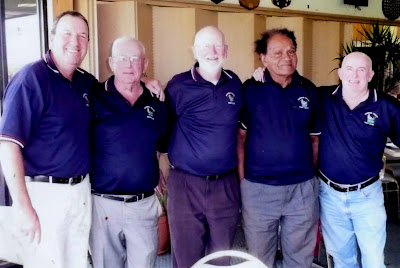 from Peceli
The Championship was played yesterday of the Geelong District Golf Veterans at Torquay and our team from Barwon Valley nearly won. In the photo from the left: Bruce Hill, Bobby McFarlane, Captain - Robin Ellis, Peceli Ratawa, Ross McFarlane. Surprisingly I won my game yesterday. Eleven clubs of the Geelong District compete in the Veterans on Mondays and the winning team for the whole season was Portarlington. We came second in the final. Last night we had the dinner for the prize-giving at East Geelong Golf Club, which was my old club. Barwon Valley is a very friendly club and accessible to the community, not as expensive as many others. On Thursdays we have a Golden Oldies Day for Seniors. Friday is a Chicken Run and dinner at the clubhouse. Saturday and Sunday there are competitions. I can't go Sundays as I'm busy with church work. I've been playing golf since I came to Ausralia and when I go over to Fiji I play occasionally. It's the best game in the world.
Posted by Peceli and Wendy's Blog at 3:51 PM