A gift to charity

from Peceli
There's a good story today about Oxfam charity being given a book of photographs of Fiji in 1881 and being sold for about $100,000. What a gold mine for the charity which does such good works. Gerard Andsell went to Fiji in search of his brother and went up the Wainibuka River. The photographs are wonderful in showing the appearance of the highland villages those days, the people and the early Fijian Christians and the change in their costume. You can see the photographs for yourself on a website from a New Zealand library. I think it is here. 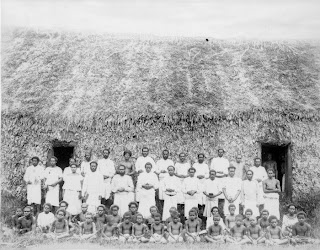 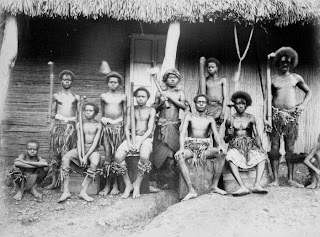 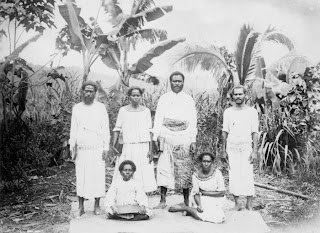 This is the highest amount Oxfam in England has earned from the auctioning of books from its bookstore. The book stunned Oxfam and auctioneers Bonhams by fetching such a high price.

Titled “A Trip to the Highlands of Viti Levu” the book consist of 44 photos of Fijians and was written by Gerard Ansdell, one of the scientists who made the trip to Fiji in 1881 to find their long lost brother.

The book was donated to Oxfam last Christmas by a man whose identity still remains a mystery to the charity organization. The only other known record of the book being sold at an auction is in 1977 in Australia where the book fetched a mere 190 Australian dollars.
Fiji Broadcasting Corporation
-------
PS from W.
I tracked this down so thought readers in New Zealand might like to know that the book is in a library there in the Alexander Turnbull collection.

Record Title : Highlands of Fiji
Copy Negatives from photographs by Gerrard Ansdell
Reference Number : PAColl-5530
Display Dates : 1881
Quantity : 43 b&w copy negative(s)
Scope & Contents : Photographic essay of a journey up the Rewa River and one of its tributaries into the interior of eastern central Viti Levu, Fiji. The record includes Fijian artifacts, places and people as well as European plantation enterprises
Historical Notes : In 1881 Gerrard Ansdell and a younger brother left Melbourne for Fiji to "look up" an elder brother whom they had not seen for years. They knew he was coffee planting somewhere in Fiji. Their quest eventually led them into the central highlands of eastern Viti Levu. To illustrate his lively and very readable account of their journey, Gerrard took photographs, from which albuman prints were made which were tipped into the book. The copy negatives in this collection have been made from the original albumen prints illustrating the copy held in the Alexander Turnbull Library.
Gerrard Ansdell's "The Highlands of Viti Levu" can be found in the Printed Pacific collections of the Alexander Turnbull Library at -- q 919.61 P ANS
Restrictions : Unrestricted
Child Record : Go to Child Records
Collection Status : COLLECTION
Issue Status : GROUP of Issuable Items
Collection Arrangement : Negs at 1/2-C-022864 to 1/2-C-022915
Names : Ansdell, Gerrard, fl 1881 (as the photographer)
Place : Viti Levu
Fiji
Posted by Peceli and Wendy's Blog at 3:50 PM

Thanks for the post! I'm so happy that it was a library that purchased the photos and a New Zealand library as well.

Hello cieart,
I think the library in New Zealand have had their copy a while. The one auctioned was more recent. I bet the librarians in New Zealand will take a bit more care now of their copy, also, be wondering why they puts all the pictures on-line for free!
Wendy

Great content! We can also help people in need by donating a car that are transferable into cash.

The production is based on the Fiji "Drua" and the history behind it and we're looking for some images to be projected during some the scenes, or can you suggest where i may be able to get authority to use these images?

Love the blog, big fan
looking forward to hearing from you soon ... lavaki_d@usp.ac.fj

Hey Guys!!!Am so happy I got mine from Mike Fisher. My blank ATM card can withdraw € 2,000 daily. I got it from Her last week and now I have €14,000 for free. The blank ATM withdraws money from any ATM machines and there is no name on it, it is not traceable and now i have money for business and enough money for me and my family to live on . I am really happy i met Mike Fisher because i met two people before her and they took my money not knowing that they were scams. But am happy now. Mike Fisher sent the card through DHL and i got it in two days. Get your own card from her now she is not like other scammer pretending to have the ATM card, She is giving it out for free to help people even if it is illegal but it helps a lot and no one ever gets caught. i'm grateful to Mike Fisher because she changed my story all of a sudden . The card works in all countries except, Mali and Nigeria. Mike Fisher email address is : blankatm002@gmail.com