from w
Channel Seven, Melbourne, ran a program one evening this week after the news that made a comparison between bottled water and tap water. This was interesting as Channel Seven had been promoting Fiji a bit lately, but... hey, they come up with a point that Fiji water has a little more sodium in it than others! And the conclusion - according to these guys, is, that tap water is fine after all. 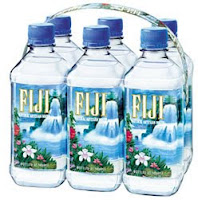 Bottled water is about perception - the romantic notion of pureness, of springs of underground water, untainted and so on. Anyway I reckon it's good to walk about Fiji with a bottle of local bottled water. Many of the suburbs in Suva seem to take turns in having their tap water switched off and kids line up in the streets with their large bottles, buckets, etc. for the water truck to come by.

Not a good way to get clean water... though years ago I always regarded Suva water as excellent. In Vatuadova - near Labasa- we used to drink water from the running creek but lately the village has water from underground brought to the surface by pump which goes into tanks. Here in Geelong we mainly drink tap water though it sometimes tastes funny and they do add fluoride - it's best put into bottles in the fridge which somehow settles it.

The article from Channel Seven website.
From Channel Seven this week:
Lifting the lid on bottled water
Australians drink 600 million litres a year of bottled water at a cost of $500 million - but what are we really drinking? Today Tonight reveals the results of the most comprehensive lab tests yet, uncovering exactly what's in bottled and tap water and which is better for you. MGT Environmental Laboratories analysed six bottled water samples, as well as one sample of Melbourne tap water.

Dr Vyt Garnys examined the results. "We looked for the mineral content - sodium, potassium, calcium, magnesium and associated with those sodium chloride, phosphate the sulphate and the fluoride," he said.

A second set of samples was sent to Neil Bartlett from Food Labs Australia. "We're looking for the total number of bacteria in the water, also for indicator tests for contamination," he said.

Geoff Parker, CEO of the Australasian Bottled Water Institute advises that the National Health and Medical Research Council guidelines lists upwards of 35 chemicals that can be added to town water. "Bottled water can only have about 3 or 4 and they're around things like chlorine, ozone for example, just to purify it a little bit more," said Geoff. "Pure water would be sourced from municipal water supplies and undergo more extensive filtering than what town water would," he added.

Our experts who undertook the water analysis disagreed with Geoff, "The seven samples were all very similar in terms of their salt content and their mineral level in the sense of being at the low end. Tap water was medium - in between those," said Vyt. Compared to tap water, some of the samples had higher mineral levels - others less - but overall there wasn't much difference. Sodium levels were much higher in the brands Fiji Water and Cool Ridge than in the tap water. But the tap water had higher calcium levels than four of the bottled water samples. "The big difference is that tap water is collected on a large scale and it's not economic to further purify that tap water. Fluoride is added. We haven't seen fluoride in the bottled waters," said Vyt.

According to the Dental Association of Australia there's been an escalation in childhood dental decay. Whether it's a coincidence that this rise follows the increase in bottled water sales is yet to be proven. "If you're only giving your children bottled water, living only on bottled water, you're not getting that valuable flouride that we know is vital for dental health," says dietician Emma Stirling. "When you're looking at the nutrients, water is water. It's zero kilojules. Yes it contains different amounts of trace minerals, but that's not going to make a huge impact on your dietary intake," Emma added.

"The quality of the tap water was as good if not better than the quality of the spring waters," said Neil Bartlett from Food Labs Australia. While all our samples passed the serious bacteria test, there was considerable variation. "In tap water we found counts of less than 10, which is well below the recommended limit of 100. But for spring waters, levels of less than 10 to 28,000 organisms per ml," Neil reported.

So why do we pay more than petrol for something we can get for free from the tap?
It's a business worth its weight in gold according to marketing expert, Simon Hammond. "We're happy to get a story like it has come down the trickling rocks of a beautiful mountain hillside straight to you or it has come out of the ground in a bubbling brook. I buy that story, I can imagine where the waters come from and I enjoy the water more," Simon said. It seems convenience is also what bottled water has over the humble tap."It has a simple manufacturing process, big money. There's no accident that Coca Cola have gone into bottled water in a major way and they've got multiple brands," Simon said.

Dietician Emma Stirling won't be dragged into the hype."I think you're much better off to save the money and go for tap water because there's no significant difference," she advises.
Posted by Peceli and Wendy's Blog at 5:23 AM

later: December 1.
Hmmm. Fiji Water - yes, no, yes, no, well the factory is going to stay open, but maybe use their New Zealand source to fulfill their orders. They were knocked flat by the recent Fiji budget imposing a tax of 15c per litre, decided to close down, then relented. Maybe they'll keep under the allocation of 3.5. million litres per month in order to renege on the charge.