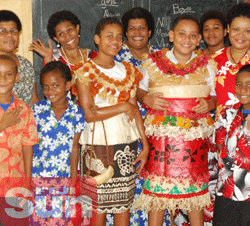 from w
It's nice tht some children in Labasa were remembering Ratu Sukuna day even though there wasn't any holiday for them on Friday. Children from the town Methodist Church, Nasea, dressed up for the occasion. It shows that the lotu (church) and vanua (Fijian culture) as still closely linked.

The children presented Fijian traditional dances, sang chores (? I presume the writer meant 'choruses' but spell-checker decided otherwise!) and had a big feast during the day.

Nasea Methodist Church head of Sunday school in Labasa, Josevata Ratuvou said the theme of the celebration was ‘ligatawa' in Fijian language which means responsibility.

The chief guest at the celebration, Ministry of Education senior education officer Macuata and Bua, Peni Saune encouraged the children through his speech to be driven by vision. “It is important to have a vision in life so you can know what you have to do or otherwise life would have no meaning,” Mr Saune said. “Like Ratu Sukuna who worked hard at every step of his life to fulfill his vision for the country of Fiji, you should also do your best for the nation as a whole,” he said.

During the celebration, the children from each sector also delivered a speech on the topic ‘responsibility’.
-------
and there's more:
Keep traditional dressing alive’
5/31/2010
Children of the Nasea Methodist Church Sunday School dressed up in traditional Fijian attire to showcase various cultural costumes at the Saint Mary’s Primary School grounds in Labasa over the weekend. The children represented three different sectors of the church. On the stage they explained what specific occasions the dressing was to be worn. It was part of an effort to mantain culture and Fijian ways of life.

Nasea Methodist Church Sunday School teacher and a mother of two, Akosita Ratuvou said that it was very important for children to know their culture including their traditional way of dressing. “It is all parents’ role to educate their children about their traditional way of dressing. They should continue with the teaching and pass it to the next generation,” said Mrs Ratuvou. She said it was noticeable that members of the younger generation were not interested in taking part in traditional ceremonies because they did not know of traditional dress codes.

Maria Curuki, a mother of three children residing in Tuatua, Labasa, said she encouraged her daughter to take part in the event to teach her the importance of keeping traditional dressing alive. “While traditional and semi-traditional forms of dressing are very much in use among indigenous Fijian culture, there is a greater influence for Asian and western fashion influence in urban areas,” said Mrs Curuki. She said dressing is part tradition and culture which was a trademark for Fijian people. “It is our cultural identity and children must be encouraged to maintain that,” she said.
Posted by Peceli and Wendy's Blog at 2:12 PM