from w
Veivutuni – means to repent, to say sorry, and is probably one of the most important words - to put the past behind by acknowledging fault, to make the possiblities of the future more hopeful. Resentment, regret, memories of failures need to be dealt with - even if it is communal and not personal.

This topic would make a good thesis for someone interested in Fiji – looking at the old customs of saying sorry, ‘soro’, and ‘veivutuni’ to apologize, and the more recent events when a whole village says ‘sorry’ such as to the Thomas Baker descendents at a ceremony in Navosa, Viti Levu, or in Bua this week to the present day Tongans after remembering the wars in Bua over 150 years ago. It’s a way of hoping to restore order - to put right with the vanua (land/culture) in order to start again. It's good for the speaker and for the recipients.

Certainly in Australia it was a pivotal moment when Kevin Rudd made a wonderful speech saying ‘sorry’ to the indigenious community for the hurts over many years. Not done by Kevin Rudd but by the European settlers since their occupation.

One man in Fiji has a habit of wanting to say ‘Sorry’ which is probably a good thing but then you sometimes wonder about the motive for planning such a special event. One time Rabuka said sorry to family of deposed Dr Bavadra
from Radio Australia - Updated April 16, 2010 16:46:06
The man who overthrew the Fiji government in 1987 has admitted to the relative of the man he deposed as prime minister that he had wronged them. Retired Major-General Sitiveni Rabuka went to Viseisei village to visit the late Doctor Timoci Bavadra's family and the traditional leader of the area, the Tui Vuda, Ratu Josefa Iloilo. He presented them with a tabua, a whales tooth, a traditional Fijian custom of reconciliation and forgiveness. General Rabuka says he made his statement to the Bavadra family almost 23 years to the day since he staged the original coup because there were things he felt needed to be said.

Presenter: Bruce Hill
Speaker: Retired Major-General Sitiveni Rabuka
•
RABUKA: I went there to tell them that I had wronged them and in fact the actual words I used is that I'm not here to apologise, I'm here to tell you that what I had done was wrong. The forgiveness came from them. In fact they said: 'ok, we thank you for coming here.'

HILL: Obviously you would have been fairly sorry that Dr Bavadra himself wasn't alive to receive your apology.

RABUKA: Right it would have been better that way. We went to the same school, a few years apart, and in fact the man who facilitated the meeting was a follower of his in '87, and was my senior at school. So I used that network to ask him to make arrangements for that meeting.

HILL: You've more or less said that you're sorry about staging the coups in 1987 many times in the past. What was different about this particular kind of apology though?

RABUKA: Well I had apologised to the people of Fiji, the Indo-Fijians during a celebration, that is the celebration that marks the first landing of the Indo-Fijians in Fijian land indentured labour system. But this one I just wanted them to know that I acknowledge that what I did was wrong.
Etc.
---------------------
Some quotes:
“Never ruin an apology with an excuse.” ~Kimberly Johnson
“An apology is the superglue of life. It can repair just about anything.” ~Lynn Johnston
“The thief is sorry he is to be hanged, not that he is a thief” This is a saying/proverb on being sorry.
“Let us endeavor to live so that when we die even the undertaker will be sorry “~ Mark Twain
“It’s easier to ask forgiveness than it is to get permission.” ~Grace Hopper
“Correct means always having to say you’re sorry.” ~Charles Osgood
“It takes courage to grow up and become who you really are.” ~e.e. cummings
A bend in the road is not the end of the road… unless you fail to make the turn.
Doomed are the hotheads! Unhappy are they who lose their cool and are too proud to say, ”I’m sorry.”
More men are sorry for speaking, than keeping silence.
-------
In today’s Fiji Times there’s a story of a community in Bua province of Vanua Levu saying ‘sorry’.
Village apologises to Tonga for killings
by Serafina Silaitoga
Tuesday, May 18, 2010 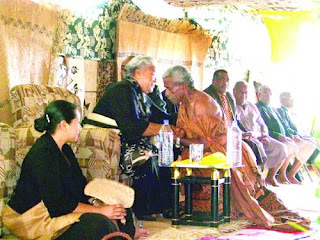 Please forgive our ancestors ... Tui Vuya Ratu Amenatave Rabona reconciles with Tongan princess Suilikutapu at Navave Village for a wrong done by their ancestors in killing Tongan missionaries. Picture: SERAFINA SILAITOGA
FOR the villagers of Navave in Bua, being forgiven for a murderous act committed by their ancestors is a major relief. And they believe the apology will bring success to them and their descendants. Their apology was accepted by a member of the Tongan royal family, Princess Suilikutapu, at the village last Friday.

About 159 years ago, the villagers of Navave killed a group of Tongan missionaries who had visited the village to spread the message of Christianity. It is believed the Tongan delegation had travelled to Bua to escort the chiefly families of Tui Vuya and Buli Raviravi back to their homes. The two chiefly families have Tongan links. When the Tongans arrived, they were not allowed to return. Instead they were killed by the villagers, who believed their acts would protect their chiefs.

Princess Suilikutapu praised the villagers for their efforts at reconciliation, adding that it was the best way to unite humanity. "For me, it's simply following the paths of Jesus Christ who started reconciliation between God and mankind," she said. "I believe such a move is the only way forward for us to remain united and in one." Princess Suilikutapu is the daughter of the late Prince Tuipelehake, Tonga's former prime minister of 25 years from 1965 to 1990.

The reconciliation program, led by Christian Mission Fellowship president Pastor Suliasi Kurulo, who hails from Navave Village, saw villagers rejoicing as they had atoned for the wrong of their forefathers. Pastor Kurulo said he experienced hardship and struggles as a young village boy. "I used to get sick all the time and I wrote to my dad and told him to pray for me because everyday I felt sick in school," he said. "I couldn't study well but after my father prayed for me, I felt a breakthrough because I didn't get sick anymore and my studies went well and because I totally turned to Jesus." Pastor Kurulo said the forgiveness would now open doors of opportunity for the villagers of Navave as God had sealed a bond that had been broken between the people of Tonga and those from Navave. "I asked for forgiveness when I travelled to Tonga once but we needed to organise one for the village so we have done that and God has blessed us with an opportunity of reconciliation," he said. "So our generation will prosper from today and we believe that."
Posted by Peceli and Wendy's Blog at 7:23 PM

That was a very moving 'veivutuni' expressed by the Bua Fijians to the Tongans. Now I would like to see the Tongans reciprocate on behalf of the Tongan (Christian) warrior - Semisi Fifita - who was responsible for the deaths of at least 30 Fijians at Natakala in the religious wars of the 1850s.
The full account is in "Exodus of the I Taukei" - p.200.

Now that's a good response to one apology. We need apologies all around it seems! Those wars with the Tongans bringing the 'lotu' using guns sound a bit complicated.
Peceli said there's another word - 'soro' - for this kind of occasion which of course sounds like 'sorrow'.
W.

What a moving and touching story, I watch the DVD of the reconciliation ceremony story and how the elders of Navave, Nawaca & Naruwai shared their stories of that auwful day it was so emotional... tears flows from my eyes when the Princess from Tonga received their apologies, it was really moving ...what day.

What a very emotional story! Thanks for sharing.

Very useful material, much thanks for the article.