from w
Two good stories come from up over the hills back of Labasa, one about recycling and the other about bus services. I had a wonderful visit to the inland village of Nubunikavula one time, almost to the border of Cakaudrove. Our family had gone there to collect planting material, and me to tape-record songs and chants from the wise music master there - daunivucu, an elderly man. We arrived the day the whole village - almost - was up the hillsides clearing ready for planting and the lunch was delicious kai in a makeshift shelter. It was fun yarning and taping stories and songs from the elderly man in my broken Fijian language and a bit of English. Some of the old hauling chants sounded a bit cheeky actually. Afterwards I'd walked back to the village and spent time with a young mother and her baby as she sang lullabies. Then I swam in the cool deep river. What a day to remember. Far from the life of a village closer to Labasa.
The stories in the Fiji papers - one from the Fiji Sun, the other Fiji Times.
No more long walks
5/15/2010 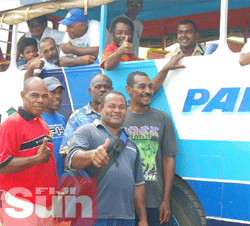 Walking close to eight kilometres to the nearest bus stop is now a thing of the past for villagers of Nubunikavula, outside Labasa town. After seven years, buses have resumed services to the villagers. The villagers, especially the school children, are now relieved of the burden of having to walk eight kilometres daily to catch the bus.

Bus services to the area came to a stand still in 2003 after cyclone Ami destroyed the road linking the village. Requests made to past authorities by the villagers to have the road fixed never eventuated. The village, with a population of over 100 people, resorted to paying $30 to hire carriers to travel to Labasa Town.

Village headman, Timoci Kalouvou, said villagers and other people living close by were happy to receive bus services three times a day. Mr Kalouvou thanked the Government for fixing the roads to the area. “We had been crying over the past years for our roads to be fixed, but no one came to our rescue,” Mr Kalouvou said. “This Government has responded and now we have buses servicing the area again.” He said students were the most affected because they had to walk to the nearest bus stop to catch the bus. The worst experience, he said, was during the daylight saving period when they had to leave home at 4am with torches to get to the main road.

Bus fare from the village to Labasa town is $1.90 which is affordable to the villagers. Mr Kalouvou said people can now travel to work, market and school with ease.
---------
The second story is about 'green' issues, such as against plastic. (It is interesting that there might soon be a decree passed banning plastic bags because they are an awful blot on the environment especially when they get into the sea.)
Maternal influence
Theresa Ralogaivau
Monday, March 01, 2010 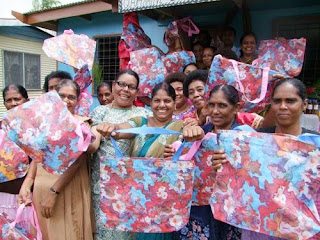 Members of the Vunicuicui Multicultural Women's Group with their shooping bags
AS mothers they know they have quite the influence with their little ones. Now they are trendsetters using recyclable shopping bags and banning plastic from their dairy shop. Recently this group of women from Nasoni, Tadravula, Waikisi, Korowiri and Nubunikavula within the greater Vunicuicui cane belt area outside Labasa turned champions for the environment and want their green attitude to rub off on their children and immediate community.

They don't boast a glorious academic background most having reached only as far as Class Eight but caring for the environment is less about qualification and more about attitude.

The change came about for the Vunicuicui Multiracial Women's Club when they invited a Peace Corps volunteer to shed some light on environmental issues. He made sense, they said because he dwelled on things familiar like disposing household rubbish.
"He showed us how to separate the different types of rubbish, the food ones that could be turned into garden manure and those that could be burnt or those that needed to be buried," the group president Julia Adivuvutaki said.

The club recently opened a dairy shop within their community. When time came to buy plastic bags to pack customers shopping in, they instead settled on cane fertiliser bags. "We all are cane farmers wives and have a lot of empty fertiliser bags lying around so decided to use that and turn it into shopping bags," Mrs Adivuvutaki said.
"We cut up the fertiliser bags and sewed it into shopping bags which were later splashed with coloured dye to make it attractive. The bags will be used to pack our customers shopping and while we do that we will advise them about the nastiness of plastic bags and request them to use the bag whenever they go shopping, wherever that might be," she said. "So in this way we are carrying out our business responsibly. We want the bags to be in the possession of every family in the community and though it may cost $2 that's a little price to pay for safeguarding the environment."

Aside from the bags, that they proudly held out for the camera, the women have also agreed not to cut down trees. "Before we used to chop big vaivai trees beside our homes but now we are just trimming branches," she said. "We believe if our environment is sustainable then our nation can prosper so we are doing our little bit here."
Posted by Peceli and Wendy's Blog at 9:53 PM