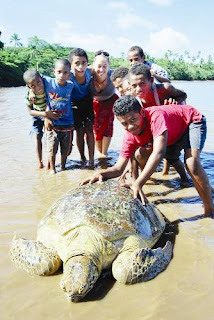 Fun and frolic ... children of Nakalou Village, Macuata, with Lady Nakalou
from w,
Amid the dross of stories of hard luck, damage, heartbreak in our world, here's one good story. Lady Nakalou, the turtle has swum all the way back to her home ground of Nakalou in Macuata. Fortunately she made it without mishap. It's good these days that there is publicity about turtles, putting forward the hope that they will survive. Of course having a grand ball to celebrate is rather surprising. Why not a grand picnic in the fresh air?

From Fiji Times today:
Ball for Turtle by Theresa Ralogaivau on Thursday, May 13, 2010

TRUE as a homing beacon, Lady Nakalou has returned to her breeding grounds at Nakalou in Macuata, completing several months of sea travel.

The third turtle to be satellite tagged in the country, Lady Nakalou left Wailoaloa Beach in Nadi where she was tagged around March.

World Wide Fund for Nature Marine Species Co-ordinator Penina Solomona said the revelation that Lady Nakalou had returned home was exciting. "We are quite excited because we've only seen this happen in other parts of the world," he said. Considered an environmental icon in Macuata, Ms Solomon said Lady Nakalou was guided by the clues from the environment like temperature, lighting, chemicals to return to where she was born.

The green turtle is also the toast of a cocktail function that has been named after her. The Lady Nakalou cocktail will be the pre-function proper at the Turtle Benefit ball to be hosted by WWF on June 4. "The fundraiser is in its third year," Ms Solomona said. "We missed out last year because of the floods. The main purpose of charging about $100 a head is to raise funds that are used for the daunivonu or turtle monitors project." The ball raised $10,000 in 2007 and $20,000 in 2008.
-----------
I wondered how when the conservationists satellite tagged this large turtle in Nadi how did they know it was from Nakalou in Macuata? So I did some google searching and found that there was a turtle workshop in the village of Nakalou and that this large turtle was taken over land and sea to Nadi for the special satellite tagging. Okay. There's a good description of the WWF workshop in Nakalou here:

One thing also is that you must not interfere with the baby turtles going down to the sea because this is the crucial stage for the female turtles to orient themselves to their natal ground to come back to later on. There was talk in some websites about magnetic references to finding their way home, the remembrance of smells, maybe even the moon. It's not conclusive though, but it is amazing.
Posted by Peceli and Wendy's Blog at 3:19 PM

Enjoyed reading your blog. I would like to invite you to visit mine. God Bless
www.numberofgreatness.blogspot.com