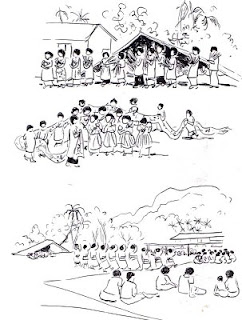 from w
There seems to be a confusion over words used in recent articles in the Fiji papers, words such as soli and tithe.

A tithe (from Old English teogoþa "tenth") is a one-tenth part of something, paid as a (usually) voluntary contribution or as a tax or levy, usually to support a religious organization. Today, tithes (or tithing) are normally voluntary and paid in cash whereas historically tithes could be paid in kind, such as agricultural products.

Sometimes the word ‘levy’ is used in the Methodist Church in Fiji as a translation of soli. The levy suggested for the annual solevu (large meeting) is $10 per person in the church. Now that is not even one tenth of the usual annual income!

And as we all know, this year the annual Fiji Methodist solevu, choir, and meetings are off! However, the Fiji brothers and sisters in USA and Australia have already collected their contributions and representatives flew over to Fiji to formally present their donation - as you can read in the article below from the Fijivillage website.

I think there is a connection between the Methodist custom of soli and the ceremony or custom of offering first fruits to the chiefs which has continued in Fiji. Instead of giving an agricultural product - e.g yams, the people give money in a ceremonial way – in a procession, and often connected with dance and singing. This is done as a community not as an individual and within the context of an annual festival. There is an aspect of reciprocity in a solevu - perhaps an exchange of mats, masi, salt, magimagi, some specially of the donor, etc. from visitors to host, and in exchange fine food, gifts and a good time had by all!

In traditional Fiji the first-fruits ceremony was held when a clan or vanua group gave to the chief a gift of yams, etc. at the beginning of harvest. The Fiji Methodists have been continuing – in an evolved form, this kind of ceremony.

The word 'tithe' also grew out of an agricultural context in the Middle East and was not cash at all. Some of the newer churches in Fiji request a tithe of one-tenth of income from their members, often giving the number of an account for direct debit. A tithe would be considerably higher than the requested levy of the Methodist Church.

New Testament scriptures are seen as teaching the concept of "freewill offerings" as a means of supporting the church: Many Christians today support their churches and pastors with monetary contributions of one sort or another. Frequently these are weekly offerings given in ‘anonymous’ envelopes and sometimes one-tenth of income is suggested, though not often fulfilled as people give also to various charities.

The principle of giving in money or kind or time or talent to a church always needs to be set alongside other concerns such as justice, mercy, honesty, as suggested in this quote from Matthew 23:23

Away with you, you Pharisee lawyers! You give to God a tenth of herbs, like mint, dill, and cumin, but the important duties of the Law — judgement, mercy, honesty — you have neglected. Yet these you ought to have performed, without neglecting the others.

More than $300,000 was given to the Methodist Church yesterday morning by the delegations from the United States at a service at the Centenary Church. Acting General Secretary, Rev Tevita Nawadra said they were delighted at the large sum presented from church members overseas which also proved to them that even though the church is going through difficult times, they always have support. Nawadra said three million dollars is needed for church operations.

Meanwhile, the New Methodist Church will be having a church crusade from tomorrow at the TFL Stadium.

On constant solis, Head Pastor, Atu Vulaono and former Methodist said the church should not burden its members.

When questioned whether the New Methodist Church was also collecting money, Vulaono said they use the tithing system.
Posted by Peceli and Wendy's Blog at 3:44 PM

Where in the Bible Were Tithes Abolished?

1. WHO #1: The Levitical servants to the priests who received the first whole tithe have been abolished. See Numbers 18:21-24. Modern equivalents to the Levites are unpaid ushers, deacons, choir, musicians, etc.

3. WHAT: The definition of tithes as only food miraculously increased by God from inside His holy land of Israel has been abolished and replaced with the false unbiblical definition of income. See Leviticus 27:30-34 and 14 other texts which describe the contents of the tithe. Yet money was common in Genesis.

4. WHERE: The destination of the OT tithes first to the Levitical cities some to the Temple has been abolished. See Neh 10:37b and Mal 3:10.

5. WHEN: The time to tithe has been abolished. The Levitical tithe was paid yearly in the Levitical cities. The second festival tithe was eaten at the three festivals. The third poor tithe was kept in the home every third year. Tithes totaled 23 1/3 per cent.

8. WHY #3: The law which condemned believers has been rendered of no effect when the believer died in Christ per Romans 7:4. No law can tell a dead person what to do.

9. HOW #1: Jesus abolished the law of commandments contained in ordinances per Eph 2:13. Tithing was an ordinance per Num 18.

12. HOW #4: The priesthood which was supported by tithes was abolished in AD 70. God's priesthood is now within every believer per 1st Peter 23:9-10.

13. HOW #5: The blessings and curses of tithing as part of the whole law have been abolished per Galatians 3:10-13.

Would you continue to send money to a church after

1. The building is destroyed?

2. The preacher has been defrocked?

3. The workers have found other jobs?

4. The members have all left?

5. The land has been inhabited by non religious people?

6. The purpose for the church no longer exists?

Hello Russell,
You are an expert on tithes. Actually I don't think that many Old Testament 'laws' etc. are relevant to our modern world. I read the Bible as inspired by
God but not as a fundamentalist would read it. To me, only the gospels are crucial and the way that Jesus viewed life and humanity, so we take our cue from his life which is about healing, justice, mercy, listening, inclusion.
w.

Its like trying to judge Americans under English law. Even the good parts suddenly became irrelevant in 1776. God does not and cannot bless New Covenant Christians because of their obedience to Old Covenant laws.


That which applies to the church has been restated and repeated in terms of grace and faith after Calvary. Tithing was not restated or repeated.

Great template! Thanx for sharing it with us
I like it! Simple and pretty More templates easy to download