What if an iguana met a famous tourist? 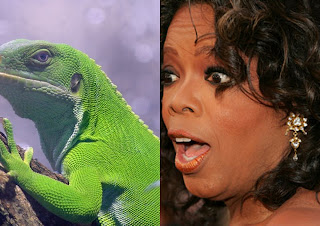 from w
What if an iguana met a famous tourist, who would be the most surprised? Actually there are 'visiting' iguanas on Laucala Island, or so they say, that need eradication, just like those on Taveuni and Qamea. The pic is of course faked and not even the 'American' iguana, but the local green iguana which is very welcome.
In today's Fiji Times, Serafina Silaitoga writes:
Villagers work with State to wipe out lizards
Wednesday, January 05, 2011
VILLAGERS are helping government officials as an iguana eradication program begins on the island. Ministry of Agriculture permanent secretary Colonel Mason Smith said he would receive an update this week. "Work on the eradication program has started and we have involved villagers to assist government officials," he said. "The team has started with the trapping of iguana and awareness programs including training of people who have assisted government officials." Col. Smith said he would meet with the team from Nature Fiji this week to finalise details of the work. "Once we do that then we can move on to the next step. The eradication program covers the whole of Taveuni, including Qamea, Matagi and Laucala," he said. "At this week's meeting we will also know exactly how many iguanas have been trapped and in which areas."

American iguana has caused fear among the islanders, especially those on Qamea, with women reluctant to to go out fishing alone.
Posted by Peceli and Wendy's Blog at 3:55 PM