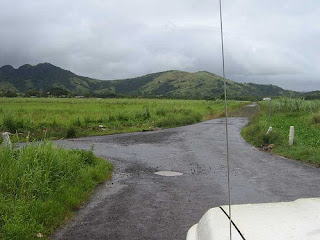 from w
Promises are made to upgrade the very bad roads across Vanua Levu, but now the not-so-sweet tale of the sugar industry has to be prioritized. Well, that's sad.
from today's Fiji Times.
Road plans shelved

THE Nabouwalu and Dreketi $30-million road upgrade project has been dropped this year. This is according to the Commissioner Northern, Inia Seruiratu. Mr Seruiratu said the action was undertaken to salvage the Fiji Sugar Corporation.

Initially it (road upgrade project) was covered under the FRUP Four project which was expected to begin in 2012 under funding by Asian Development Bank (ADB), he said.

The Government looked at its financial position and had plans to start in 2011 (on the project) and an amount of $30million was allocated for the purpose. But unfortunately because of the problems we encountered with the FSC, the Government now has to find other sources of funds from elsewhere. And that is why the Nabouwalu and Dreketi Roads project funding was dropped so that the FSC could be salvaged.

Labasa Chamber of Commerce president Ashok Karan said it was sad that the project had been dropped.

But the Commissioner Northern has ensured the roads will be worked on, Mr Karan said. Improved road conditions will boost business in the North because we have the pine chip mill and bauxite mine in Bua. It will greatly benefit commuters and encourage tourism.
Posted by Peceli and Wendy's Blog at 3:34 PM