Well it beats swimming in the Qawa River!

from w
The Fiji Sun runs soft stories three-quarters of the time, and stories about future planning, dreams and visions that may or may not come to fruition. Hardly journalism. Anyway, here's one that is surprising. A swimming pool for Labasa? Well, that would certainly be better than trying to swimming in the nearby Labasa River or Qawa polluted badly river! The only pool I ever saw in Labasa was at the Grand Eastern Hotel and here is a photo-shopped version of it. It isn't really as big as this! Down the road past Tabia though there's a nice lap pool at Palmea resort, very nice and appreciated by the tourists who stay there. 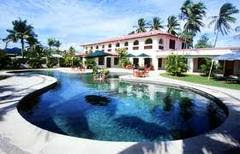 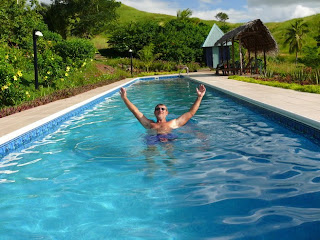 Public pool revived 10/28/2010
The only public swimming pool in Labasa Town may soon be up and running again.

Six years since the closure of Labasa’s only public swimming pool, major maintenance and upgrade works had started yesterday. The swimming pool, formerly the property of the Labasa Town Council, is now under a 25-year lease term to the Gurbachan Singh Memorial Trust. The people of Labasa can now expect a newly-refurbished look to the leisure park and pool.

Labasa businessman Charan Jeath Singh, who is committed to the development of the North, set up the memorial trust under his late father’s name, Gurbachan Singh. He said in an earlier interview that the core function of this Trust is to upgrade and operate the swimming pool, which has been closed for many years.

Like many others who have a passion to share their profits for rehabilitation and development, Mr Singh said his company plans to reach out to the underprivileged students and community. “The funds that we raise from this activity, the profits from the pool operation and donations from our subsidiary companies will pay for school fees,” Mr Singh said. “We will also offer scholarships to the poor and needy students in 2011.”

Project co-ordinator Rajendra Mani said the community pool project sourced out funds during a fundraising drive at this year’s Vodafone Festival of the Friendly North from August 28 to September 4. Mr Mani said once completed, members of the public could expect the best leisure service.

“We are clearing the compound, the pool and its changing rooms. Later, we will build proper thatched bure shelters and put out barbecue sets, which people can use when they bring their families,” Mr Mani said. “A major upgrade will take place so that people enjoy our services. This is part of our community outreach to the people in Labasa.” National Fire Authority officers also contributed to the clean-up drive at the swimming pool area yesterday. Mr Mani said their (firefighters) presence was a positive and united effort in their work towards community outreach.
---------
And almost buried in the Fiji Times news in the news briefs section is a rather interesting little item - however of significance.
Back to Times

ALL Government ministries, departments and agencies have been informed to resume subscriptions to The Fiji Times. Government had directed those departments to refrain from subscribing to this newspaper in 2009, including placing advertisements. That decision had been rescinded as of yesterday.
Posted by Peceli and Wendy's Blog at 4:33 PM