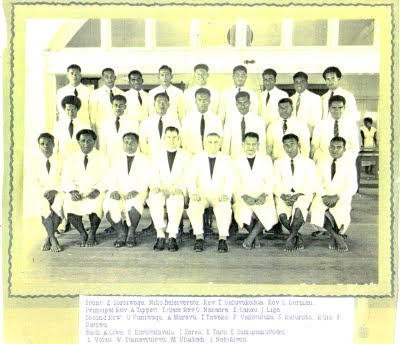 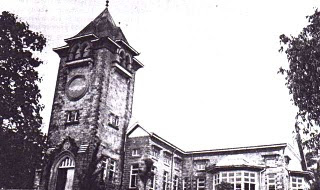 from w
Peceli and I have many connections with Baker Hall in Davuilevu. I taught Class Seven and Eight art there one time - part of Lelean Memorial School. And of course Peceli studied to be a talatala at Davuilevu.One MYF camp - which were annual events for young people at Davuilevu - I painted a backdrop for a play about Thomas Baker. At the time Peceli was a talatala in Naikoro, Navosa so the Thomas Baker stories relate to the villages there.

So when I read about the centenary of Baker Hall, I wished that we could be there this week. An interesting feature of this week is a trek across Viti Levu as reported in today's Fiji Times.

Trek in the footsteps of Thomas Baker
Tuesday, October 12, 2010

MORE than 40 young men took a trip down memory lane and re-traced the steps of Thomas Baker on his fateful mission to spread the gospel.Davuilevu Division superintendent Reverend Malakai Curulala said the group left Mission House, which was the home of Reverend Thomas Baker, located on the slope of Dilkusha Home, before he left on the fateful trek to Navatusila in Navosa.Called in the footsteps of Thomas Baker, the trekkers will spent the night at all the villages Reverend Thomas visited before he and eight others reached Navatusila.

"There were supposed to be 30 of them leaving," he said. "On the morning they were to depart there were 41. Many young men at the villages they stayed in joined them on the walk so there are more than 50 of them now and the number keeps increasing. They reached Nadrau on Saturday evening and will spend tonight (Monday) at Navatusila." Mr Curulala said a truck would transport the trekkers to Nausori tomorrow. "At the farewell ceremony in Navatusila tonight they will light a torch, which they will bring back with them," he said. "They will return via the Queen's Road where they will spend tomorrow night at Naselai or Lotu Village. At 8am on Wednesday, they will meet us in Nausori for the march. The torch will be brought to Davuilevu."
Posted by Peceli and Wendy's Blog at 2:29 PM

In the Fiji media today (Tuesday) I read that Rev Josateki Koroi spoke at Davuilevu and as usual criticized the financial stresses on members of the Methodist Church this time fundraising to fix up the Baker Hall church building. Of course there is a difficulty in the upkeep of old buildings. Maybe voluntary labour from locals and overseas could be part of the solution instead of expecting the ordinary people to find $600,000 when many people are stressed to the max.
W.