What is the value of 'Earth Day'?

from w
Some say that Earth Day hour without electricity is a waste of time. They say it doesn't really save electricity at all, but others say it's symbolic and makes us pause and think of the value of electricity and our dependence upon technology and how we need to say, Slow down. Here in our house I lit a candle inside an old chipped mug and turned off four lights but our house guest needed to shower before going on night shift as Security (where there would be tons of flashing lights in a bar and poker machines) so he turned on one light. Peceli was out on an errand and when he came home he said, 'Hey, what's with the darkness?' I said, 'Even the pyramids in Egypt and the Eiffel Tower in Paris are dark for Earth Hour.' 'I didn't notice any difference in the streets,' he replied. I started to sing, 'Hello darkness my old friend...' the old Simon and Garfunkel song. Then Peceli sang a bit of a song about 'Vula'!

Okay, people are lazy and indifferent and it's really the huge factories and office towers that need to be more vigilant about waste of power. We certainly take it for granted though. I remember that for six years, - in Rakiraki and in Labasa- we didn't have access to electricity, except for one time we had a generator to show evangelistic films amidst the cane farm settlements. It certainly was a different life then.

Even Fiji, where many people outside the electricity grid, and even within it at times, do not have lights and power twenty-four hours a day, had some special events, which to me, was a very good idea. One Fiji media outlet says:
Fiji led Earth Hour by ‘switching off’Sunday, March 30, 2008 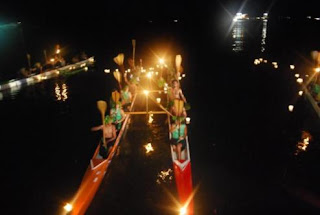 Fiji Takia Club paddlers out on Suva foreshore releasing candles to mark earth hour Taken from / By: Courtesy of WWF.Fiji led the world in the fight against climate change by ‘switching off’ for Earth Hour with more than 370 cities, councils and towns around the world participating. At approximately 8pm last night hundreds of businesses and individuals ‘switched off’ showing the world that Fiji is ready and willing to take action on climate change.

WWF spokesperson Kesaia Tabunakawai said commitments for ‘lights off’ came from Taveuni, Savusavu, Labasa, Levuka, Nausori, Suva, Sigatoka, Denarau, Lautoka, Lami, Kadavu and Nadi. She said a highlight for the hour was the President’s village - Viseisei in Vuda where the whole village switched off for Earth Hour.

Tabuanajawai said the support from over 200 businesses and many individual households, coupled with the support from Interim Prime Minister Commodore Voreqe Bainimarama was overwhelming. She added what is left now is to await the Fiji Electricity Authority to make an announcement on the amount of energy saved during Earth Hour.

The event was celebrated last night at the Suva waterfront where about 100 floating candles were released into the bay representing Fiji’s many islands participating for Earth Hour. Tabuanakawai says they hope to get the same amount of support for Earth Hour next year.
Posted by Peceli and Wendy's Blog at 10:58 PM