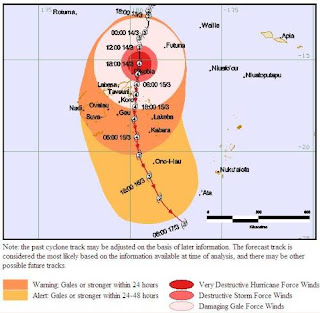 from w
Fijivillage has a report from 8 a.m. today (Monday) written apparently for mariners, and a graphic of the possible route of the cyclone, now Category 4. Most news items talk about a cyclone as if it lasts a few minutes or hours but really it is usually two days of continuous wind and rain which can cause enormous damage. Near the centre is of course a murderous wind. The Australian newspapers showed their disregard when they give only about ten lines to Fiji and only talk about tourists. One article noted that electricity is now off in Labasa and many people have moved to evacuation centres, mainly schools.

OTHER VESSELS FAX PLUS 679 6720190 OR EMAIL naditcc@met.gov.fj.
---------
(later about 8 p.m. Fiji time)
I phoned Labasa again and the mobile phone worked, but my family there don't have electricity and there is a curfew on movement. The young woman who answered the phone said the wind is very strong and it's raining and the cane crops are damaged and there surely will be flooding in the Labasa area. This is a household on the outskirts of Labasa town with about seven people inside a small wooden house in Tuatua housing area. I haven't contacted the family in the village of Vatuadova so I hope their wooden houses are strong. Isa Viti with so much trouble after a lot of hard work on the farms.
Posted by Peceli and Wendy's Blog at 2:26 PM