Everyone is family during a hurricane 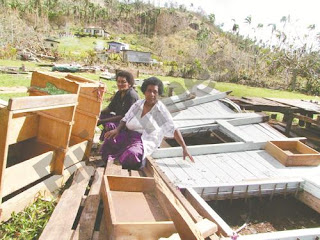 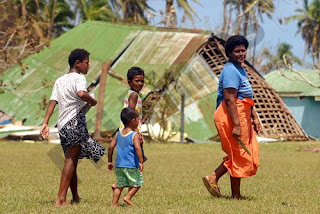 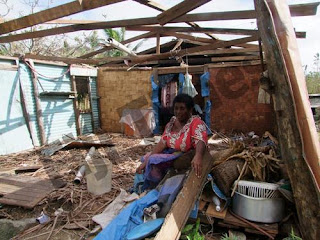 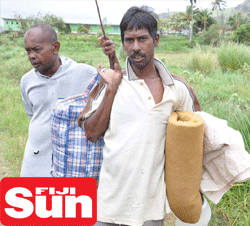 pictures from Lau, Cakaudrove, Macuata.from w
A story from Vunivutu in Macuata shows that during a disaster such as a cyclone, neighbours have to become as family members to help each other to survive. All kinds of stories are now coming out about the events of early last week - some people hid under floorboards as the houses collapsed, others huddled in a generator shed, others were holed up at the North Pole Hotel in Labasa. Many went to the strongest building in the area - a hall, school or church. Ethnic difference does not matter as everyone needed to be protected from the wild wind.
from Fiji Sun
Cyclone binds new ties
3/23/2010
Out of adversity comes unity as Cyclone Tomas has shown, bringing a cane farming community together like never before. At the height of the cyclone last Monday, several cane farming families close to Vunivutu Village, in Macuata, took refuge in the village hall for days. Close to 100 people huddled in the cold in the village hall sheltering from the fierce winds and heavy rain.

A farmer, Arvin Kumar said they were thankful to the villagers for accommodating them at the village from the natural disaster which destroyed most of their farms. Mr Kumar said they were equipped with warm clothes and food rations for a few days as they camped at the village. “Most farmers from surrounding farming settlements in Vunivutu moved to the village hall for shelter two days before the Cyclone struck,” he said. “As the winds intensified, more families joined us as we tried to keep warm,” said Mr Kumar.

Along with the destruction of Cyclone Tomas, a new relationship developed between the natives of Vunivutu and their farming neighbours. Mr Baleibua said during the time of disasters, people should look after each other despite their differences.

The shooting of the most watched worldwide television series Survivor was taken at the very same village of Vunivutu few years ago.
Posted by Peceli and Wendy's Blog at 1:54 PM

This computer can't read some languages so sorry, I will have to delete the comment as it could be kind or not so.
w.