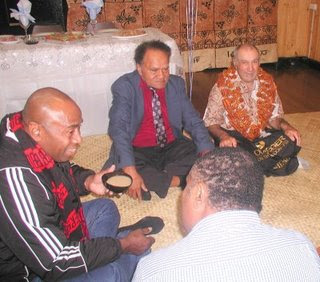 from w
And about time too. Here's a memo from the Health guys who are really concerned about the spread of H1N1 influenza in Fiji, a disease that may be mild for most people, but for the vulnerable it can lead to pneumonia. So the suggestion is to stop sharing the one bilo when drinking yaqona. That does sound sensible to me and in our gatherings in Geelong some of the drinkers do bring their own bilo, partly to make sure they are not given a huge drink! Taki! We've been drinking kava the past couple of nights in remembrance of our dearly loved cousin, Neimani Lala, from Wailevu who died last week.

from Fijilive:Suva, Fiji
Temp: 75 °F / 23.9 °C
Wind: 19.3 KMH
Mostly Cloudy
LOCAL NEWS Get own ‘bilo’, yaqona drinkers toldJuly 22, 2009
Get your own ‘bilo’ for grog, the Health Ministry has warned as a preventative measure against the pandemic H1N1. This advise however has not gone down well with many people in Fiji as the sharing of kava bowls and the single use of a glass during alcohol consumption is common.

Health spokesman Iliesa Tora said people in Fiji do realize how the H1N1 is spread but the fact remains that they are ignorant. “It has become a tradition in Fiji for people to be sharing the same bowl and glass during kava and alcohol consumption, something I believe people in Fiji will have a hard time adapting to,” Tora said.

He added, however it is important that people realize the H1N1 virus spreads faster than the common flu and its symptoms become obvious after seven days of contracting the virus.

Bar tender at Suva’s Down Under nightclub Roland Koroi admits that patrons still use the one glass taki style. “It’s been used for many years and most people are comfortable with.”

In the busy Marks Street of Central Suva, Skyline Barber Shop, have had the tradition of always having a mix of yaqona whenever the business starts and this continues throughout the day. Business owner Mohammed Nizam told FijiLive that although his business partner has a separate bilo for himself, due to his religious beliefs, all others including himself, share one bowl.

According to the Ministry of Health, the virus is spread through contact and not through air.
Posted by Peceli and Wendy's Blog at 5:21 PM