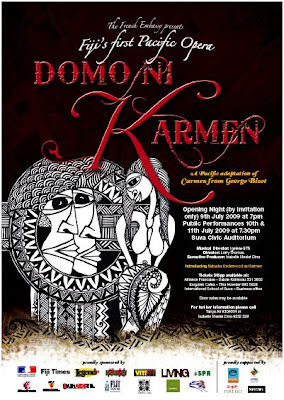 from w.
Go, the youth of Fiji in getting on with song and culture. It's on now and here's the intro from a website from the French guys.
-----------
The French Embassy is proud to announce the staging of Fiji’s first Pacific opera from the 9th to the 11th of July at the Suva Civic Centre.

Domo ni Karmen or Karmen’s voice is a Pacific adaptation of Carmen the most beloved and played opera of all time. In this production musicians and artists have come together to showcase their talents. Domo ni Karmen is directed by renowned musical director Igeles Ete and local playwright and stage director Larry Thomas. Natasha Underwood takes on the role of Karmen with the assistance of dancer and choreographer Ateca Ravuvu.

Georges Bizet’s rich musicology is adapted in a Pacific feat with lali drums, bamboo nose flute, ukeleles and clapping in accord with more classical instruments to create original sounds from Bizet’s famous arias. Musicians from the New Caledonia Conservatoire will also be taking stage.

The original Carmen by French composer Georges Alexandre César Léopold Bizet was performed in Paris in 1875. Carmen is the story of a “femme fatale”, a stunning and manipulative woman who leads men astray by her beauty and dancing. She is a fatalist and a hedonist living entirely for the present moment.

In parallel, Fijian women are too often seen as introvert stifled by rules of men, tradition and religion. Like Carmen beyond their incredible strength and resilience lie passion, cheerfulness and desire.

Thus Domo ni Karmen aims to tell a Melanesian story with the action set in a traditional village. The characters are a representation of everyday life with the arrival of Karmen the city girl, who disrupts the established order of rural women in the village. Behind the Carmen story is the modern woman who strives for equal rights, freedom and acknowledgement in society.

The initiative of Domo ni Karmen was put together by the cooperative work of talents available in Fiji and the Pacific region. The invitation of musicians from New Caledonia is testament of France’s vision to promote cultural exchange and cooperation within the Pacific region.

This production is also a celebration of women and their contribution to life and to our society. We hope that this production will be an inspiration for self-worth and collective self-esteem for women. Youth issues and choices are also highlighted as they journey through life.

Finally we hope that this production will bring tolerance and hope as our humanity is revealed despite our differences of culture and problems in our society. The voice of Karmen in our fast changing society is a challenge to censoring from tradition, religion and racisms. It is also a voice for the protection of basic human rights and reconciliation through music and dance. 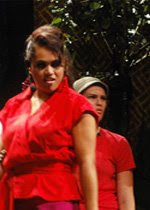 And from Fiji Magic today:
Carmen comes to life in Pacific adaptation


Penioni Narube and Natasha Underwood during the Domo ni Karmen Opera show,the first Pacific Opera, at the Civic Centre in Suva.
All time opera classic ‘Carmen’ was brought to life in Suva last night by a 29 year old commerce student in a Pacific adaptation hailed as a perfect rendition of the original French musical.

‘Domo Ni Karmen’ or ‘Karmen’s Voice’ premiered before a full house audience of about 700 including diplomats, lawyers, judges and members of the business community at Suva’s Civic Auditorium.

Artists put on a grand show of their talents to the beating of the lali (Fijian percussion instrument), bamboo nose flute, ukulele (island guitar), clapping and some amazing dancing and singing.

Karmen - Natasha Underwood, 30, is a student at USP and mother to two children. She was raised with her seven sisters by a single parent and was taught at a very young age to work hard and always put God first.

Iosefo - Nabotuiloma Komaisavai is a senior research officer at the FNPF and lists his interests as music and "contributing to the betterment of young people." His first musical appearance in church was at age five with his grandparents in the choir.

Mikaela - Akanisi Tuilovoni Bulai, 20, is from Nadona, Dreketi in Rewa. She started singing when she was five years old and has been a regular feature at the Methodist Church choir competition between 1998 and 2008. In 2007, she was named to the U19 Fiji netball team.

Marica - Molly Garfield Powers is an American who came to Fiji in 2005 as a Peace Corps volunteer. After two years in the village of Naiserelagi in Ra, she was hired by Fiji Water as its culture and community affairs co-ordinator based in Yaqara. She is now based in Suva as management for FIJI Water Foundation.

Seini - Matelita Lusiana Gonerogo Bale, 26, started singing at the age of seven and hasn't stopped. She is remembered as the "tiny girl with a big voice" and has taken part in many talent quest and Methodist Church choir competitions.

Sunia - Penioni Narube is a student at USP. He sings bass with his acapella group, the Four Boys, but this name is changing because the group has increased to 10. He loves Chinese food and says, "the amount of food I can take in at one sitting never ceases to amaze my family and friends. I can eat anything and everything."
Posted by Peceli and Wendy's Blog at 5:55 PM

Wish they would do a tour of the najor aussie cities

'Carmen' is not the most beloved and most performed operas of all time.

Puccini's 'Madama Butterfly' and 'La Boheme' and Verdi's 'La Traviata' have usually been more popular, even if only slightly.

Okay, others have the finest arias but Carmen is more singable by ordinary people without the operatic training. I especially liked the version from the 60s entitled 'Carmen Jones'.
w.

Interesting comment about the lead and how she was taught to put God first. Interesting.....