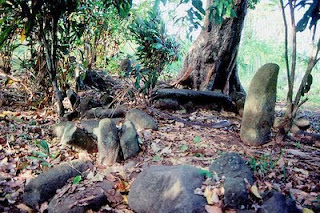 from w
I found this poem in a file while cleaning up the computer. It was published a while back in a local anthology.


Goddesses hauled stones overland,
.the men’s temple was built,
tabu to women, a secret place.
A priest's falsetto prepared for war,
ritual blood smeared the grass,
the shark-god was feared.
as mana leapt over stones.

Grandfather, after a Christian grace,
says, 'The gods are friends;
they organize, sustain us.
In return we host others,
bhaini and bhaiya, who then
plough valleys and hillsides,
and lease money becomes
our new tradition.'

Men no longer dance in moonlight
but glance sidelong at neighbours
as school buses stall on rough roads.
Sandals slap bitumen in political marches
and hymns are sung at a road-block.

But now, men dream over kava bowls,
cannot speak of islands
burnt by the sun, but strum guitars
and sing in falsetto
of silver seas and lost love..


Notes:
Near Labasa in Fiji there is a historical site called Wasavulu. Mana is the Polynesian word for spiritual power. Bhaini and bhaiya – Hindi words for sister, brother - refer to the presence of Indian cane farmers. After the first coup of 1987 Fijians in Labasa protested against the disregard of the Sabbath. Today, people seem passive even with tight emergency laws.
Posted by Peceli and Wendy's Blog at 10:41 PM