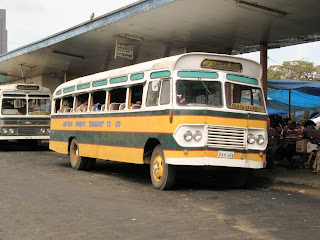 from w
From Lautoka an enthusiastic writer of often engaging and funny letters comes this one about bus travellers. Great ideas for a pleasant bus journey. I would add one more - don't show the movie 'Speed' on a journey from Nadi to Suva which was slightly strange as the travellers forgot the erratic driving skills of the bus driver and watched Keanna Reeves in action. Thank you Allen Lockington for your stories about everyday life in Fiji.

From the Fiji Times which is now on-line again after a rest.
Passenger behaviour

I often travel by bus and there have been times when I would have gotten off half way to my destination because of loud music played by the driver, school kids behaving like thugs, people talking to each other like there was no one else around them and bus drivers who talk on mobile phones or are having a running conversation with a passenger friend or bus checker.

I have also encountered men who were drunk and were swearing and harassing people, especially women. People get on a bus to travel from one place to another in comfort.

In the afternoons working people just want to get on the bus and go home without having to endure loud music and unruly children, many of them will have had a tough day at work.

I would like to suggest to the bus companies and the Land Transport Authority to also put up signs in the bus about passenger behaviour.

And to include that the driver can put a passenger off the bus if the passenger was annoying.

I was reading on the Internet about how to behave on the bus, here are some tips:

* Move in when you are sitting in the aisle seat of a three-row seat.

* If you are not travelling for two or more hours, just do it. Also, you shouldn't have to be told to move for pregnant women and the elderly.

* Step out of the way of people leaving the bus. If you are at the door then step out and allow the people to enter. Likewise, they should be stepping aside at the bus stand or bus stop for you to get off.

* Deodorant is always a good idea and so is gargling some mouthwash.

* If you missed your grooming opportunity at home, your commute is not the time for nail clipping, hair spraying, or any form of gargling.

* Cover your mouth when you cough or sneeze. If you feel ill wait for the feeling to pass before boarding a bus filled with passengers with open-toed shoes.

* Schoolchildren should behave on the bus and not talk loudly or swear and call out to friends on the bus.

* And if you had a few beers after work, keep to yourself.

Allen Lockington
Lautoka
-------
PS In Australia there's a new law about swearing - it can incur a penalty of over $200.What is the world coming to! Big Brother is watching you, indeed.
Posted by Peceli and Wendy's Blog at 3:58 PM